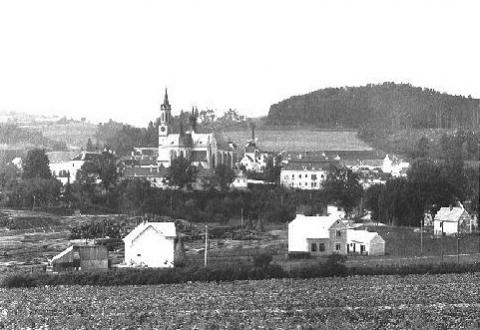 Following the Munich Agreement of 29 September 1938, German troops invaded the Sudetenland, until then part of Czechoslovakia, on 2 October 1938. On 20 November 1938, the southern Bohemian districts of Kaplitz (Kaplice) and Krumau (Český Krumlov) came under the civil administration of the Upper Danube Gau. Within the district of Kaplitz was the Hohenfurth Cistercian Abbey (Klášter Vyšší Brod) founded in 1259. A day after the invasion, on 21 November 1938, the Gestapo arrested the abbot Tečelin Jaksch. His loyalty to the Czechoslovakian state and the fact that he had stored the abbey's most important artworks, nine panels by the Hohenfurth Master painted around 1350, in the State Gallery in Prague brought him a six-month prison sentence. In early 1939 a government commissar from the Upper Danube Gau took over administration of the abbey. In 1940, the Holy See made Hohenfurth, until then part of the Bishopric of Budweis (České Budějovice), subject to the Diocese of Linz. On 17 April 1941, the abbey was dissolved by the Linz Gestapo and its art collection seized. That year as well, August Eigruber, Gauleiter and Reichsstatthalter of Upper Danube, reported to the "Führerbau" in Munich that Hohenfurth was suitable alongside the dissolved Benedictine abbey Kremsmünster for storing artworks. Four large and twenty medium-sized rooms were available. Initially, however, the artworks for the "Sonderauftrag Linz" were stored at the Reichskunstdepot Kremsmünster.

On 10 February 1943, Heinrich Klapsia, provisional director of the Collection of Sculpture, Arts and Crafts in the Kunsthistorisches Museum (KHM) in Vienna took over the Mannheimer collection from Berlin earmarked for the Kunstmuseum Linz and had it stored in Hohenfurth. In autumn 1943, applied art items from the expropriated collections of Alphonse and Louis Rothschild and Rudolf Gutmann were added, along with "Gau-owned" paintings. In early 1944 a three-headed delegation visited Hohenfurth Abbey to investigate its suitability for storing the Linz coin collection. Gottfried Reimer, deputy head of the "Sonderauftrag Linz", and (Heinrich) Justus Schmidt, responsible for culture in the Upper Danube Gau and also head of the art and cultural history department of the Landesmuseum in Linz approved the transport of the coins from Kremsmünster to Hohenfurth. Fritz Dworschak, First Director of the KHM and responsible for the "Sonderauftrag Coins", who had been represented during the inspection by his colleague Günther Probszt, proposed that the coins and medals be moved within the Reichskunstdepot from the second floor to the ground floor, but Reimer disagreed. In June 1944, Spedition Bartz, formerly E. Bäuml, was charged with transporting the entire collection, including the Linz collection, to Hohenfurth. The move was completed at the end of July 1944. Required furniture and other installations for the offices in Hohenfurth were purchased from the Dorotheum to enable Günther Probszt and Leo Schindler from the "Sonderauftrag Coins" to catalogue the numismatic acquisitions for Linzer Kunstmuseum at the depot. Some objects (including the Mannheimer collection) were moved for conservation reasons to Salzbergwerk Altaussee. In autumn 1944, the evacuation of the coins and medals had to be arranged within just five weeks. Probszt and Schindler packed the objects, which were stored in coin trays in thirty-one special crates, and deposited them in the abbey cloister. The establishment of a Wehrmacht field hospital in the upper floor meant that space was extremely limited. There were also staffing problems, and from the beginning of 1945 there was no guard on site. On 28 February 1945, there were still 15,018 coins and 7,878 silver and non-precious-metal medals earmarked for the Linz coin collection in Hohenfurth. The gold coins – a report dated 3 January 1945 mentioned 1,491 "diverse" medieval and modern gold coins – appear to have already been moved at this time. Twenty-seven of the thirty-one crates, a box with books and two coin trays from St Florian Abbey were transported to Altaussee by 10 April 1945. Nine days later, thirty-four crates of books and on 28 April 1945 the remaining coins and books, along with two newly purchased coin trays, were collected from Hohenfurth.

On 6 May 1945, the US army reached Hohenfurth and erected a guardroom to protect the artworks stored in the abbey. After the war, Hohenfurth became part of Czechoslovakia again. In June and July 1945, the 3rd US Army transported over one thousand objects to the Central Collecting Point in Munich. Leo Schindler had left Hohenfurth with the last transports. Günther Probszt remained there until the end of the war and was entrusted with the return of the coins to Austria. In June 1945 he was still able to travel to Linz for a meeting, but thereafter the Czechoslovak authorities forbade it, and he was not granted an exit visa until September 1947. The abbot Jaksch, who returned in June 1945, was only able to revive the abbey's activities for a short time. After the Communist Party came to power in 1948, he left Czechoslovakia for good, and in 1950 the abbey was dissolved for a second time. Recent provenance research indicates that only part of the Hohenfurth art and coin collection has been restituted. After the war, the Austrian Bundesdenkmalamt (Federal Monuments Authority) was given over 3,300 coins and medals, as well as archival documents, books and a painting, in trust. Only three inventories and one book were returned, and the vast majority of the items, including a portrait of the abbot of Hohenfurth Quirin Mickl, were auctioned in the "Mauerbach auction" in 1996.