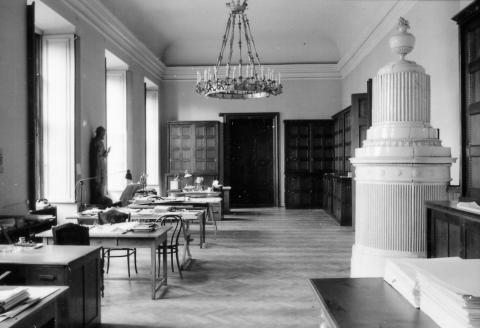 After the First World War and the collapse of the monarchy, the law of 5 December 1918 banning the export of objects of historical, artistic or cultural significance was intended to stop the massive migration of art and cultural assets to other countries. The legislation soon proved to be inadequate. It was not until the legally defined inclusion of the German-Austrian State Monuments Office (deutschösterreichisches Staatsdenkmalamt) in the asset capital levy and housing requisition legislation after 1919 that the state authority also had information about private art collections in Austria. Under the new laws, collectors could be exempted from financial levies and the reduction of their living space by making their collections accessible to the public. To do this, however, they had to provide the State Monuments Office with lists of their collections and allow it to inspect them in situ. In this way, the monuments authority was able to gain an overview of existing private art and cultural assets, creating the basis for a steadily growing and centralized corpus of knowledge. The Federal Constitution promulgated on 1 October 1920 made monument protection a federal matter, and the State Monuments Office was renamed Federal Monuments Authority (Bundesdenkmalamt). The amended version of the Export Prohibition Act in January 1923 allowed the monuments authority to place art and cultural objects under state oversight. After decades of efforts to establish a legal regulation for monument protection, the Monument Protection Act also entered into force in September 1923. It included not only art and cultural objects but also groups and collections that formed an entity on account of their historical, artistic or cultural context and whose preservation was in the public interest. Preservation orders were issued from 1924. The first centrally administered monument list was created in 1931, containing several movable monuments, such as the Beethoven Frieze, the Czernin'sche Gemäldegalerie and parts of Stefan Auspitz's collection. That same year, Fortunat Schubert-Soldern, who was the sole board member after 1913 and president of the Federal Monuments Authority from 1928, was replaced by Leodegar Petrin. During Petrin's period of office, considerable cost cuts were introduced, resulting in a reduction in monument preservation measures and also the publication of a new series, the Austrian Dehios. The Federal Monuments Office was dissolved as an independent authority through the Federal Law of 25 May 1934 and was replaced by the Central Monument Protection Office (Zentralstelle für Denkmalschutz) within the Federal Ministry of Education.

After the annexation of Austria to Nazi Germany, the Central Office received additional funding and staffing. Leodegar Petrin retired in September 1938 and was succeeded by Herbert Seiberl as provisional director of the Department of Historical Cultural Monuments and Kurt Willvonseder as head of the Prehistoric and Early History Department. Following the move from Palais Starhemberg on Minoritenplatz to the Salesianerinnenkloster at Rennweg 8, a restoration workshop and photo laboratory were added. The discriminatory Nazi laws forced persecutees to leave the country. As part of the inspection of removal goods by the Bezirkshauptmannschaften (district captaincies), the Central Monument Protection Office was responsible for the registration of valuable art and cultural objects. By the end of 1938, employees had processed more than 9,500 export applications and conducted the same number of inspections. By the end of 1941, more than 17,500 applications had been received. In around 900 cases, the Central Office prohibited the export or retained the objects. Various "safeguarding measures" were also carried out on behalf of the monuments authority. The measures contained in § 4a of the 1923 Export Prohibition Act, such as the "securing" of objects to prevent their export, facilitated the expropriation of art and cultural objects legalized by the Nazis. The Viennese municipal authorities and the various Bezirkshauptmannschaften handed over the collections of Oscar Bondy, Hermann Eissler, Otto Pick, Nathan Eidinger and others to the Central Office. The objects were stored on site or in the Central Office depot, the Orangery in the Lower Belvedere. Some objects secured earlier were also in the Central Depot of Seized Art Objects in the Neue Burg. In July 1940, Friedrich Plattner, State Commissar for Education, Culture and Popular Education, also gave the Central Office responsibility for the 6,000 seized cultural objects stored in the Central Depot in the Neue Burg. After the "special representative" (Sonderbeauftragter) Hans Posse had made his selection for the planned art museum in Linz, the rest of the seized and secured objects, which under Nazi law later became the property of the German Reich, were dispersed as part of the "Führer distribution" among museums in Vienna and the Gaus. Even before they were distributed, the Ministry for Internal and Cultural Affairs had entrusted the subordinate Central Monument Protection Office with protecting fixed monuments and movable private and ecclesiastical assets. In 1940 the Central Monument Protection Office was dissolved and replaced by the Institute for Monument Preservation (Institut für Denkmalpflege) headed by Herbert Seiberl as the central scientific institute directly answerable to the Reich Ministry of Science, Education and Culture (REM). The Gau conservation departments (Gaukonservatorate ) were attached to the Reich governors' offices (Reichsstatthaltereien). Coordinated by the Central Salvaging Office (Zentralstelle für Bergungsmaßnahmen) in the Department of Art Promotion, State Theatres, Museums and Popular Education, the employees of the Institute for Monument Preservation, together with representatives of the museums and libraries, organized the transport of art and cultural objects to over 200 storage sites in the Lower Danube and Vienna. From August 1943 transports organized by the monuments authority, initially ecclesiastical objects and items from the museum in Wiener Neustadt, went from Vienna to the Altaussee salt mine. From October 1943, art and cultural objects from secured and seized collections were moved successively. From 1944, objects were transferred from the depot in Kremsmünster Monastery, from the Old Reich, such as from the "Führerbau" in Munich. The stored objects were managed locally. Measures were undertaken in Vienna at the same time to protect historical buildings and monuments and to photograph and document them.

After the war and the re-establishment of the State Monuments Office pursuant to the provisions of the Authority Transfer Act, ten employees were dismissed with retroactive effect from 27 April 1945 as "illegals", including Herbert Seiberl, Kurt Willvonseder, Walter Frodl and Waltraude Oberwalder, and two were suspended. Thirty-five employees were deemed to be "exonerated" and eight "minor offenders". In 1947 the Landeshauptmannschaft in Carinthia classified Walter Frodl as a "minor offender" and he was rehired by what was now the Federal Monuments Authority (BDA) in 1948. Three restorers, including Emmerich Bergthold, and an architect were retained as irreplaceable despite their political incrimination. Karl Krenn, head of the Prehistory Department of the Naturhistorisches Museum, was interim director of the State Monuments Office until he was succeeded in August 1945 by Alphons Quiqueran-Beaujeux. In July 1946, Otto Demus became director of the Federal Monuments Authority. He saw it as his task to bring back the dispersed art objects to Austria and restore them to their rightful owners, but also to retain the most important works for public collections – either through compensation or exchange. Apart from the repair of war damage and the necessary securing and reconstruction of buildings and monuments damaged in air raids, the monuments authority in collaboration with the Allied military authorities also organized the return after the war of the stored objects. Only after they had been released by the occupying powers could the cultural objects of proven Austrian provenance be transported to the monuments authority's Vienna depots. From 1948, objects that had been transported directly after the war by the US troops from the salt mine in Altaussee to the Central Collecting Point (CCP) in Munich were moved to the Salzburg Residenz depot managed by the Federal Monuments Authority. The monuments authority was closely involved in the implementation of the seven restitution laws enacted until 1949, among other things by acting as trustees, storing and delivering the goods. The provisions of the Export Prohibition Act led to numerous forced "donations" to Austrian museums in return for approval from the Federal Monuments Authority for the export of the remaining restituted objects. In 1952 the objects still in Munich assigned to Austria by the US forces were transported from the CCP in Munich via Salzburg to the BDA depot in Vienna. It was not until the Volksgericht judgment of September 1952 regarding the forfeiture of Adolf Hitler's assets that the objects of Austrian provenance earmarked for the planned art museum in Linz became the property of the Republic of Austria. The BDA was put in charge of them until their restitution or assignment to federal museums in 1963. It gradually emptied the depots in Vienna. Objects whose former owners could no longer be identified, objects from former Nazi offices and in the command headquarters of the occupying powers, and the remaining objects from Altaussee salt mine and other depots in the provinces were given to the BDA in 1966 for safekeeping. They were inventoried and stored in the Charterhouse in Mauerbach, Lower Austria. Apart from a few restitutions under the two art and cultural object settlement laws of 1969 and 1985, the more than 8,400 "ownerless" objects remained there until they were taken over in 1995 by the Bundesverband der Israelitischen Kultusgemeinden.

Since 1998, the Commission for Provenance Research, today part of department IV/B/4/b Art Restitution and Memory Culture in the Federal Ministry of Art, Culture, the Civil Service and Sport, has had offices on the premises of the Federal Monuments Authority. The office supports provenance researchers in the various collections, helps compile dossiers and also manages the publicly accessible BDA archive and the restitution and export documents contained in it that are required for research.