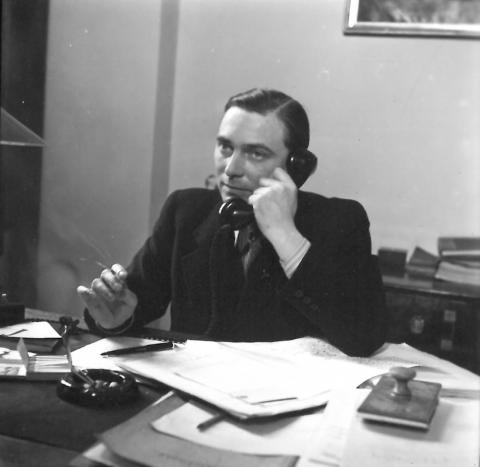 While studying law, Herbert Seiberl was until 1929 a student in Hans Tichy and Josef Jungwirth's painting class at the Akademie der bildenden Künste in Wien (Academy of Fine Arts in Vienna). In 1930 he obtained a doctorate in law and in 1935 in art history at the University of Vienna. He worked as an assistant teacher from 1931 to 1935 at the secondary school in Hollabrunn, Lower Austria. While teaching, he offered several times to assist in the culture department of the Vaterländische Front (Fatherland Front), which he joined in December 1933. Afterwards he was a voluntary assistant in the sculpture and applied arts collection at the Kunsthistorisches Museum in Vienna, until he was employed in September 1936 as a research assistant at the Zentralstelle für Denkmalschutz (Central Monument Preservation Office) in the Federal Ministry of Education.

He joined the banned NSDAP in 1933 without, as he stated in his Volksgericht trial in 1947/48, ever having been active. In his membership application in May 1938, however, he stated that he had supported the July putsch in Bad Mitterndorf, Styria, in 1934 and encouraged employees of the Zentralstelle to abstain from voting in the plebiscite on Austria's independence announced by Kurt Schuschnigg. He joined the NSDAP officially on 1 May 1938 with membership number 6,200.962. In 1938 he headed NS cell IV of the Ministry of Education group at the Zentralstelle für Denkmalschutz. After the retirement of Leodegar Petrin, president of the monuments authority, in September 1938, Seiberl became temporary head of the Zentralstelle and later temporary head of the department for historical cultural monuments. After the annexation of Austria to the German Reich, both president Petrin and his successor Seiberl insisted on the notification of artworks in the registration form under § 12 of the 1923 Denkmalschutzgesetz (Monuments Preservation Act). This enabled them to waive the export regulations in the Austrian Denkmalschutzgesetz and avoid the introduction of the Reichliste national wertvollen Kunstguts (Reich cultural heritage list). In December 1938 Seiberl drew up plans at Gasthaus Zur blauen Traube in Bad Aussee for one of the most important museums of folk life and folk art in the province of Austria, which was to open there in 1942. Its holdings were made up of parts of the collections of Rudolf Stiassny, Stephan, Konrad and Anna Mautner, Ernst Königsgarten and Aranka Munk stored in Altaussee, Bad Aussee and Grundlsee. By order of the Zentralstelle, district and provincial authorities throughout Austria had secured many works of art from March 1938 under § 4a of the 1923 Export Prohibition Act. Seiberl and his colleagues managed and later stored the secured collections, which from July 1939 also included the art works reserved for the "Führer". Among the artworks and cultural objects stored from October 1939 in the Orangery in the Lower Belvedere, one of the monuments authority depots, were objects from the collections of Serena Lederer, Oscar Bondy, Fritz Mandl, Julius Priester and Paul Zsolnay. In July 1940 Friedrich Plattner, State Commissar for Schools, Culture and Popular Education, commissioned Seiberl to manage the sixteen seized Viennese collections, including those of Louis and Alphonse Rothschild, Alfons Thorsch and Otto Pick. Some of the objects were still in the Zentraldepot in the Neue Burg, whereas other had already been transferred to "Jagd" in Steinbach near Göstling for storage. After the restructuring and renaming of the Zentralstelle für Denkmalsschutz in the Ministry for Internal and Cultural Affairs as Institut für Denkmalpflege (Institute for Monument Preservation), Seiberl became overall head of the authority in 1940. When monument preservation became a task of the provincial authorities, he had to double as Gaukonservator for Vienna and Lower Danube answerable to the Reichsstatthaltereien (Reich governors' offices). As head of the Institute, on the other hand, he was answerable directly to the Reichsministerium für Wissenschaft, Erziehung und Volksbildung (Reich Ministry of Science, Education and Culture) in Berlin. In both functions he was responsible for salvaging movable artworks and securing immovable ones, as well as monument preservation and conservation. He prevented the demolition of the listed but decrepit Schloss Thürnthal in Lower Danube by combining the necessary restoration in 1943 with the adaptation of the castle as a depot for the Viennese collection of Anton Lanckoroński. Together with Franz Juraschek, Upper Danube Gaukonservator, he established the salt mine in Altaussee as a depot. In late August 1943 he organized the first transport there. Initially he planned to salvage only those artworks and cultural objects for which he was responsible as Gaukonservator, including objects from the cathedral and Stadtmuseum in Wiener Neustadt. From October 1943, salvage transports were extended gradually to the collections secured by the monuments authority, including objects from the collections of Serena Lederer, Bruno Jellinek and Julius Freund. This was followed by various objects acquired as part of the "Sonderauftrag Linz" and objects from the "Altreich" (artworks from the Einsatzstab Reichsleiter Rosenberg from Schloss Neuschwanstein, objects from the NSDAP chancellery in Berlin, the "Führerbau" in Munich, etc.). Gottfried Reimer appointed Seiberl in 1944 as his deputy in Altaussee. After it became known that August Eigruber, Gauleiter und Reichstatthalter of Upper Danube, intended to destroy the mine and the artworks stored in it, Seiberl and a few colleagues organized the transfer of the most valuable items to alternative storage areas inside and outside the mine. When the 3rd US Army under General George Patton took over the depot on 8 May 1945, Seiberl was stripped of his authority for the site.

Because of his NSDAP membership, Seiberl was dismissed from his position in the public administration with backdated effect to 6 June 1945. With his former colleague Hilde Schrader, he founded the Restaurierwerkstätte Seiberl und Schrader in Bad Aussee. In 1948 the Volksgericht in Linz acquitted Seiberl of charges under §§ 8, 10 and 11 of the Prohibition Act (registration fraud, Illegality, and qualified illegality). In its judgment the court referred to statements by some employees of the Bundesdenkmalamt (Federal Monuments Authority) stating that he had continued to employ political persecutees and those persecuted persons under the Nazi Nuremberg race laws (including Eva und Victor Kraft, Theodor Hoppe, Erwin Hainisch, Josef Zykan and Hubert Bernhard). He worked as a restorer until his death in November 1952.