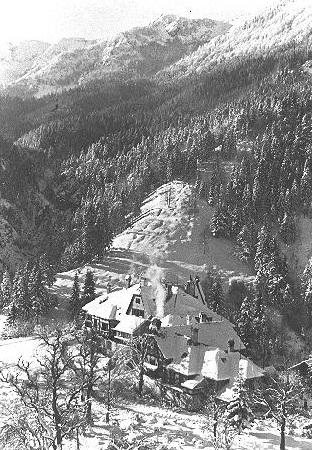 Until the annexation of Austria to the German Reich, Steinbach bei Göstling hunting lodge and some other properties in the region were owned by Louis Rothschild. By order of the Gestapo the land, forests and buildings on the Waidhofen an der Ybbs estate (EZ 714 of the Lower Austrian land registry), including Steinbach hunting lodge, were expropriated in April 1938. In 1939 the Ministry of Internal and Cultural Affairs, Department IV (Education, Culture and Popular Education) declared Steinbach to be a secret depot. From autumn 1939, together with Gaming (code name "Schloss"), the building (code name "Jagd") became the most important depot outside Vienna for items from the Kunsthistorisches Museum (KHM), with objects from the Egyptian and Near Eastern, Ambras portrait, Greek and Roman Antiquities and Coin collections, the Picture Gallery, the Imperial Treasury and the Collection of Sculptures, Arts and Crafts. Fritz Dworschak, provisional director of the KHM and administrator of the salvaging from Vienna museums and of the Zentraldepot für beschlagnahmte Sammlungen (Central Depots for Seized Collections) had some of the art objects that had been expropriated from David Goldmann, Rudolf Gutmann, Felix Haas, Alphonse and Louis Rothschild, and Alfons Thorsch transported to "Jagd". Unlike the salvaging from museums, the costs were borne by the Gestapo. Five armed guards, all members of the NSDAP, watched over the building. Like the office staff, cleaning and research personnel in the jointly managed "Jagd" and "Schloss" depots, the men were subject to strict rules of behaviour – smoking and alcohol were forbidden, and they were not allowed to communicate with the outside world. The outside and inside temperature was measured and recorded several times a day. The restorers secured damaged objects and ensured that the museum and Central Depot objects were kept separate. Transports back to Vienna were frequently arranged, either to present objects in temporary exhibitions or to bring Central Depot objects to museums for safekeeping. Because of the valuable objects in the depot, not to mention the idyllic location and possibility for hunting, various prominent guests came on visits to look at individual objects or to spend a few days in Steinbach, often with their families. Baldur von Schirach came to the hunting lodge in September 1940 with his wife, children and staff and was shown precious items from the secular Imperial Treasury and objects from the consfiscated collection of Oscar Bondy from St Peter, which had been allocated a short time before to the Kunsthistorisches Museum. Schirach visited again at the end of May 1941. Walter Thomas, head of the General Section for Art Promotion, Theatre, Museums and Popular Education, also spent a few days in "Jagd" with his family in April 1941. Because of the high humidity, however, the imposing building was not ideal for storing art objects. There were also structural defects, resulting among other things in a burst water pipe in July 1941. It was decided in July 1942 to abandon the building as depot. The museum and expropriated collection objects were removed in September 1942. The items from the Central Depot intended for the Linz art museum were stored in the Kremsmünster Reich Art Depot, and the Kunsthistorisches Museum objects elsewhere, particularly in Gaming and Vienna. The building was allocated to the Reich Forestry department and kept in reserve for emergencies.

Under the First Restitution Act, Louis Rothschild, now living in New York, claimed restitution of the expropriated properties in 1946 and in 1948 urged that the process be speeded up. He had already made an agreement with the federal government, approved by the Council of Ministers, to transfer title to Gut Waidhofen an der Ybbs to the Austrian state after restitution in return for pension payments to former Rothschild employees. Thus Steinbach Castle was taken over in 1949 by the Austrian Federal Forestry department, and in 1962 the former Rothschild hunting lodge was purchased privately.