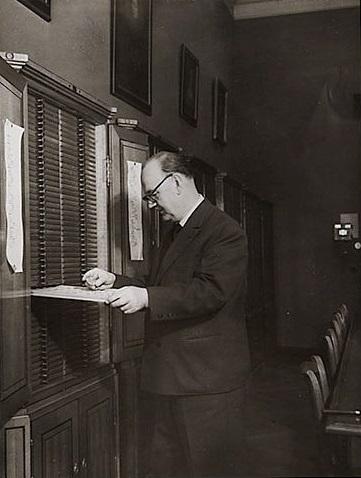 After leaving school in 1920, Eduard Holzmair worked for several years at the Anglo-Austrian Bank in Vienna, before studying German, history and art history at the University of Vienna. He completed his doctorate in 1931 with a thesis entitled "Eckehart and Tauler: a comparison", and in the same year passed the State Examination at the Institut für Österreichische Geschichtsforschung (Institute of Austrian Historical Research). He was an intern from 1929 in the Coin Collection of the Kunsthistorisches Museum (KHM) in Vienna and in 1936 he was promoted to assistant. After August Loehr left the museum and Fritz Dworschak was appointed provisional director following the annexation in March 1938, Holzmair headed the Coin Collection and was appointed curator in 1942. He never joined the NSDAP but was a member of various affiliated organizations such as the Nationalsozialistische Volkswohlfahrt (National Socialist People's Welfare), the Reichskolonialbund (Reich Colonial League) and the Reichsluftschutzbund (Reich Air Raid Protection League). During the Nazi era he was involved in drawing up lists of Polish cultural items in the Generalgouvernement, which were then to be expropriated. In his memoirs, which were published in 1971, he himself wrote that he "kept a record of the major Polish coin collections in Kraków and Warsaw as part of the general record of Polish art assets". Because of his involvement in the "Sonderauftrag Coins", he was exempt from military service for a long time and was not therefore enlisted into the Wehrmacht. The seized coin collections from several Austrian abbeys, including Klosterneuburg, Heiligenkreuz and St. Florian, earmarked for the "Führermuseum" Linz, were stored in Stift Kremsmünster. They were processed by Holzmair and Fritz Dworschak. As a curator, he had access to the KHM depot in central Vienna. In autumn 1944 he was finally enlisted in the air force, where he was in an anti-aircraft unit and for a short time in US captivity.

After the war, he was involved in negotiations for the restitution of coin collections acquired by the Coin Collection under the Nazis. In the case of Alfred Menzile's collection, he persuaded the heirs to "donate" some selected items to the Coin Collection, in return helping to obtain export authorization for the remainder of the collection. In 1949 he worked in the Central Collecting Point in Munich investigating the remaining coin collections of Austrian provenance destined for Linz. That year he became head of the Bundessammlung für Medaillen, Münzen und Geldzeichen (Federal Collection of Medals, Coins and Monetary Tokens), as the KHM Coin Cabinet was called at the time, and habilitated in numismatics and the medieval and early modern history of money. In 1952 he became director of the Federal Collection and in 1959 extraordinary university professor. In 1966 he was appointed First Director of the KHM, until his retirement a year later. For many years he was a member of the board of the Österreichische Numismatische Gesellschaft and was its vice-president from 1950 to 1968.