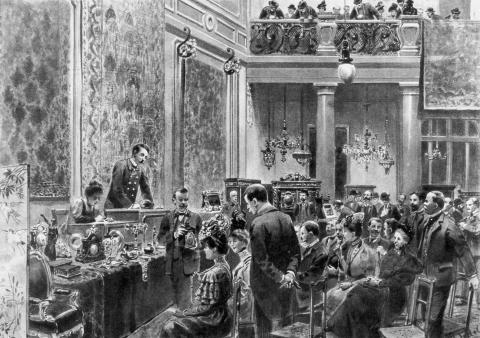 The Wiener Versatz- und Fragamt (pawn and inquiry office) Annagasse 20 / Seilerstätte 30 in the present-day 1st district of Vienna was founded by Emperor Joseph I on 14 March 1707. Its main activity was to provide loans against security, with the proceeds going to the poorhouse fund. The Fragamt functioned as a housing and employment office and for notification of transactions of all kinds. Objects could be pawned and then auctioned if they were not reclaimed within a year. The imperial patent also allowed independent auctions. The oldest surviving multi-volume auction catalogue dates from 1792. For lack of space, the office had already moved four years earlier to a former convent at Dorotheergasse 18. This building, enlarged and converted by the architect Emil Förster, was reopened in 1901 in the presence of Emperor Franz Joseph and is still the headquarters of the Dorotheum today. With its new name k. k. Versatz-, Verwahrungs- und Versteigerungsamt (Imperial and Royal Pawn, Storage and Auction Office) it now also became a place of storage. Its main activity was as an auction house, however, with objects being displayed on two floors in large rooms with skylights. The auctions became more diversified with the founding of an art department in 1900, and further departments and new categories were added. Because of the heavy demand, branches were founded – in 1880 in Josefstadt, followed by others in Vienna, Mödling, Wiener Neustadt, St. Pölten, Baden, Klagenfurt and Villach. After the end of the monarchy and the establishment of the First Republic, the Versatz-, Verwahrungs- und Versteigerungsamt needed articles of association. In 1923 the name Dorotheum was also officially integrated in the company name for the first time, a bank concession was granted and the state-owned enterprise became an independent commercial entity. Between the wars, it functioned as a flourishing auction house, and the sale of prominent collections, such as those of Bertha (von) Suttner, (archduke) Ludwig Victor and Albert Figdor, enhanced its reputation to such an extent that an additional floor was added in 1925/26 to meet the demand. In 1935 the employees became civil servants, being required as a result to confirm their commitment to the Vaterländische Front (Fatherland Front) and to take an oath to "God and Austria".

Directly after the annexation to the Nazi German Reich, employees were required to take an oath of obedience to Adolf Hitler. In March 1938, the Dorotheum was in the charge of a temporary administrator, and the top echelons, including the director general, were replaced. That summer, twenty-nine Jewish employees were dismissed or retired. The NSDAP members Franz Hofbauer and Anton Jennewein became the new managing directors. Jennewein in particular focused increasingly on art transactions at the expense of the pawn activities and devised new strategies for economic growth. Apart from acquisitions as part of the auction business, cooperation with the customs and tax authorities, the city council and the Gestapo was sought. The desired revenue was achieved through auctions of household furnishings and jewellery of expropriated Jews and others persecuted under the Nazi regime, including removal goods submitted by Vugesta (Gestapo Office for the Disposal of the Property of Jewish Emigrants) or Güterverkehrsgesellschaft Adria. Since the Gestapo sometimes had household furnishings auctioned by the Dorotheum directly in the apartments after their seizure, there was a marked increase in household auctions in 1938. Catalogues were issued with the addresses but not the names of the injured parties. In the absence of sufficient objects in Austria, Johann (Hans) Herbst, the future chief art expert, also conducted lucrative business in occupied Netherlands and France without any thought for the provenance of the objects. Since objects submitted by the Nazi offices were treated in the same way as voluntary submissions and were not therefore labelled specially in the catalogues, the buyers did not generally know whether the objects were the result of forced sales. Moreover, because the objects had also been expropriated beforehand by the Nazi authorities, the Dorotheum sales did not come under the Annulment Act after 1945. In most cases the Dorotheum sold objects on commission for third parties, taking a 5 to 12 per cent fee from submitters and 19 per cent from the buyers. The auctions were held for the account of the German Reich, with the proceeds going directly to its organizations or to blocked accounts and hence not to the original owners.

In August 1946, Jennewein was sentenced to two years' imprisonment for high treason. The charge was not connected with his function in the Dorotheum but rather with his membership of the NSDAP from 1933 and his political activities as district head of the Tennengau and Gauleiter of the province of Salzburg from 1931 to 1935. In the wake of denazification measures after 1945, a further 170 of the 900 or so employees of the Dorotheum were dismissed. In spite of the massive damage to the main building and the complete destruction in some cases of branch offices, the Dorotheum managed within a few days of the cessation of hostilities to commenced restricted operation again. The pawn and storage activities were started up first and in autumn auctions were held. Business flourished until 1954, as illustrated by the staff increases and the building enlargement. The Dorotheum played an important role in the post-war restitution debate, since its records clearly showed which objects had been submitted by Nazi offices. Victims of Nazi expropriations were able to search the Dorotheum files for objects that had previously belonged to them, at least to the extent that their names were listed. It also provided written documentation, including information about the initial purchaser of the expropriated goods, as data protection was waived for the Dorotheum until the expiry of the restitution laws. This also applied to objects coming under the law on the compulsory surrender of precious metal objects, jewellery and pearls that had been handed over to the Dorotheum against a minimum payment. Because of the shortage of space, the Dorotheum records were kept only as long as required under the tax laws in force at the time. They were destroyed after expiry of the restitution laws, and it is therefore almost impossible today to find out any information regarding transactions between 1938 to 1945 on the basis of records. The reorganization through the Dorotheum Act of 1 January 1979 and its new legal status (Dorotheum Auktion-, Versatz- und Bank-GmbH) led to the closure of some branches, the establishment of a sales department and the sale of the Dorotheum bank. The company was privatized in 2001, bringing to an end almost three hundred years of state administration. In acknowledgement of the Dorotheum's historical complicity with the Nazi state, 32 million dollars from the proceeds of sale of the Dorotheum went to the General Compensation Fund for Victims of National Socialism. The new owners also acknowledged their responsibility by establishing a department of provenance research. External researchers studied the existing archive material, which was subsequently handed over to the Austrian State Archive and then made available to the public. After many years of research, a history and analysis of the Dorotheum entitled Zwischen Staat und Wirtschaft: Das Dorotheum im Nationalsozialismus was published in 2006.