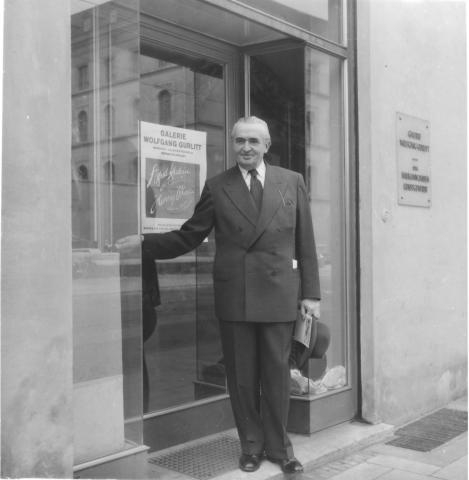 Wolfgang Gurlitt was born on 15 February 1888 as the son of the art dealer Fritz Gurlitt (1853–1893) and his wife Anarella, née Im-Hof (1858–1935). His father managed Galerie Fritz Gurlitt at Behrenstraße 29 in Berlin, which was continued after his death in February 1893 by his partner Willy Waldecker. In 1912 Wolfgang Gurlitt took over the dealership, which at this time already had business relations with the Vienna art scene. Waldecker and Wolfgang Gurlitt were in direct contact, for instance, at the latest by 1912 and 1914, respectively, with Egon Schiele, in the case of Gurlitt not only as an art dealer but also as a collector. After 1918 Gurlitt was the sole proprietor of the gallery. He married Karoline Julia (known as Juliette) Goob in that year. At this time he also met Lilly Agoston (1894–1950) from Hungary, who was his companion until she died. Gurlitt lived with his wife, her older sister and Lilly Agoston at Matthäikirchplatz 7 in Berlin. He also had an affair in the late 1920s with his much younger secretary Käthe von Salzen (née Lange, 1900–1976). After divorcing his first wife, he married von Salzen on 20 May 1937.

Because of the Jewish origins of his grandmother Elisabeth Gurlitt (née Lewald, 1823–1909), Gurlitt was classed by the Nazi regime as a "2nd degree Mischling" or "quarter-Jew". This did not prevent him, however, from seeking opportunities to profit from the Nazi art and culture policy, albeit with only moderate success. His cousin and fellow-art dealer Hildebrand Gurlitt (1895–1956) was much more successful. Wolfgang Gurlitt and Lilly Agoston purchased "degenerate art" in Germany and abroad. Because of her Jewish origins, however, Agoston was forced in early 1939 to flee to Budapest. It was only after a sham marriage with the Danish citizen Hans Peter Christiansen arranged by Wolfgang Gurlitt that she was able to return in 1940 to Berlin. In that year Käthe and Juliette Gurlitt acquired a villa at Reitern 38 in Bad Aussee, where the family lived during the 1940s. Gurlitt continued to organize exhibitions in his Berlin gallery and purchased confiscated artworks in the Dorotheum and elsewhere. At the 471st art auction there in February 1942, he bought the 1916 Schiele painting Krumau Landscape (Town and River), which had been confiscated from Daisy Hellmann, who had been forced to flee. From 1941 Gurlitt became more involved in the lucrative transactions associated with the "Sonderauftrag Linz". His efforts failed to meet with success with Hans Posse, whom he had known for years, or with his successor Hermann Voss, who were not satisfied with the quality of the artworks on offer. In June 1943, Gurlitt transferred both his and Lilly Christiansen's artworks to Bad Aussee. On his return from a buying trip for the "Sonderauftrag Linz" in Alsace, the two were living in Berlin again, when the gallery, business records and remaining objects were destroyed in an air raid in the night of 22/23 November 1943.

Now based in Bad Aussee, Gurlitt continued to deal in art objects and tried in vain to become involved in the storage of the artworks acquired for the Führermuseum in Linz so as to avoid being enlisted in the Wehrmacht. He continued to expand his personal network and in the Bad Aussee area met Herbert Seiberl, head of the Institute for Monument Preservation, and also Justus Schmidt (1903–1970), who was responsible for culture in the Upper Danube Gau. It was Schmidt who, as art expert in the Upper Austrian provincial government after the Second World War, suggested to the city of Linz that a modern art gallery be established on the basis of Gurlitt's private collection. The city of Linz signed an agreement to that effect with Gurlitt in July 1946. Gurlitt loaned the artworks in his collection free of charge to the newly established Neue Galerie and was its unpaid director. The gallery opened on 23 October 1948. Gurlitt came to an agreement with the city of Linz on the designation Galerie der Stadt Linz, founder and director Wolfgang Gurlitt. From 1949 he entered into sales negotiations with the city of Linz, which culminated in the purchase by the municipality in January 1953 from Gurlitt of 76 paintings and 33 prints for around 1.4 million schillings. Following further acquisitions by Gurlitt, this amount rose by 1956 to around 1.85 million schillings. The business produced by his art dealership established at Galeriestrasse 2b in Munich in 1950 meant that Gurlitt was increasingly represented in Linz by Lilly Christiansen and, after her untimely death in September 1950, by his long-standing associate Walter Kasten (1902–1984). He ultimately resigned on 31 January 1956 as director of the Neue Galerie, which was taken over by Kasten, who remained in this position until 1973. In the early 1960s, Gurlitt was obliged for financial reasons to sell his Schiele collection, in part through Galleria Galatea in Turin. After Gurlitt's death on 26 March 1965, his widow Käthe Gurlitt continued to manage the gallery with the employee Andreas Bartsch, who finally closed it in 1977.

After the Second World War, artworks from Wolfgang Gurlitt were to be found not only in the Neue Galerie in Linz but also in other public collections, such as the Österreichische Galerie, the Albertina and the Leopold Museum. Just like Gurlitt himself, these institutions were now faced with the problem of the questionable origins of individual works. After early (unsuccessful) restitution claims, such as one by Daisy Hellman in the late 1940s, the Nazi provenance research that began in the late 1990s in particular ultimately resulted in the return of artworks to their original owners or legal successors. So the city of Linz decided to return works it had purchased in the 1950s from Gurlitt to the heirs of Fritz Loewenthal (1999), Daisy Hellmann (2003), Aranka Munk (2009), Harry Fuld junior (settlement 2011), Oskar and Malvine Reichel (2012), and Jean and Ida Baer (2014). In 2011 the Art Restitution Advisory Board recommended the restitution to the legal successors of Ella Lewenz of an oil painting by Walter Leistikow from the Österreichische Galerie, which had purchased it from Gurlitt in 1944. The same year the Leopold Museum Private Foundation agreed on a settlement with the legal successors of Oskar Reichel regarding three paintings by Anton Romako, purchased from Gurlitt by Rudolf Leopold and included in the inventory of the museum founded in 1994. Artworks connected with Gurlitt are still the objects of provenance research today.

This article was written in cooperation with Julia Eßl and Anneliese Schallmeiner.