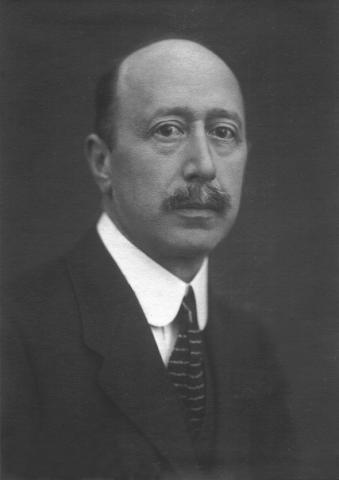 Carl Julius Rothberger, son of a clothing manufacturer and founder of the Jacob Rothberger department store on Stephansplatz in Vienna, did not join the family business like his brothers Moritz, Alfred and Heinrich Rothberger but studied medicine from 1891 at the University of Vienna. After obtaining his doctorate, he worked initially in the bacteriology laboratory of the k. k. Militär-Sanitäts-Comité, then at the Rudolfstiftung hospital and in 1898 at the 1st Medizinische Universitätsklinik. In 1899 he joined the Institute of General and Experimental Pathology and habilitated in 1904 in general and experimental pathology. In April 1912 he was appointed extraordinary professor and in 1924 became deputy head of the Institute of General and Experimental Pathology. He devoted himself from 1908 to basic research in the field of electrocardiography and discovered the cause of atrial fibrillation. In 1936 he was obliged to take early retirement on account of cutbacks by the Federal Ministry of Education, and the position of extraordinary professorship was removed from the list of posts at the university. At Pollak's request, the Ministry allowed him to continue working without pay at the Institute as an honorary professor until his scheduled retirement in 1941.

Rothberger, who was of Jewish origins, was arrested on 23 March 1938 by the Gestapo and was only released thanks to the intervention of the dean of the Faculty of Medicine, Eduard Pernkopf. His marriage to Leopoldine Rothberger, née Wohlfahrt, who was "Aryan" according to the Nazi definition, was defined as a "privileged mixed marriage" which protected him, albeit not completely, from Nazi persecution. On 30 June 1938 Rothberger had to submit a declaration of assets, in which he listed the medical library at the Institute, which belonged to him. In a supplement in November 1938, he put the value of the books at 1,000 Reichsmarks and pointed out that he had no effective access to them. As the law on rental agreements with Jews of 30 April 1939 excluded "mixed marriages" from the requirement of forced eviction, it was possible for the Rothberger family to keep their apartment in Philipphof in Vienna's 1st district. Carl Julius and Leopoldine Rothberger died on 12 March 1945 during an air raid, which destroyed Philipphof, today the site of the Memorial against War and Fascism. Their daughter, who was at school at the time of the air raid, survived and emigrated after the war to the USA.

During the provenance research at today's Zweigbibliothek für Geschichte der Medizin (history of medicine branch library), books formerly owned by Rothberger – as indicated by bookplates and handwritten entries – were discovered. They had been inventoried after 1939. In September 2010 the Medical University of Vienna restituted twenty-nine books to the Rothberger's daughter. In subsequent years the Medical University decided on two further restitutions of books formerly belonging to Rothberger.