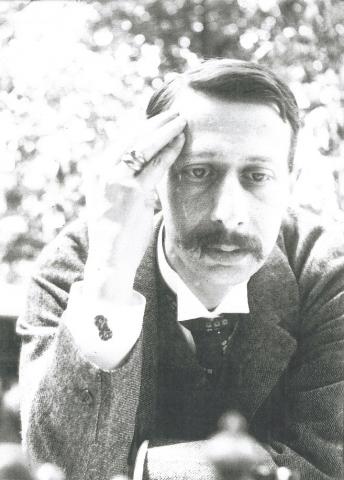 After his father's death in 1899, Heinrich Rothberger, who trained as a tailor and commercial manager, took over his textile company Jacob Rothberger and department store on Stephansplatz in Vienna together with his brothers Moritz and Alfred. He lived with his wife Ella, née Burchardt (1878–1964), and two sons Jakob Johann, called Hans (1899–1987), and Friedrich, called Fritz (1902–2000), in an apartment in Jasomirgottstraße in the 1st district. Since the end of the nineteenth century, he had amassed an important porcelain collection. After the annexation of Austria in 1938, the Rothberger family were persecuted as Jews. Fritz Rothberger, who was on a research trip in Warsaw, did not return to Vienna and emigrated in 1939 to Britain and from there in 1940 to Canada. In early summer 1938 Hans Rothberger was arrested and interned at Dachau. While the company was Aryanized, the family was put under increasing pressure to liquidate their reserves and sell their assets. On 18 and 19 November 1938, ninety-five porcelain objects belonging to Heinrich Rothberger were auctioned at Auktionshaus Hans W. Lange in Berlin with the proceeds being used to pay the compulsory levies. On 21 November 1938, the Vienna city council ordered the securing of all of Rothberger's artworks, which were subsequently listed by the Zentralstelle für Denkmalschutz (Central Monument Protection Authority). On 14 February 1939 Hans Rothberger was released from Buchenwald, where he had been transferred from Dachau in autumn 1938, and is thought to have left Vienna in May 1939. Numerous objects from the Heinrich Rothberger collection were sold in 1939 and 1940 through the lawyer Camillo Limpens, Auktionshaus Weinmüller Wien and Antiquariat Gilhofer & Ranschburg, particularly to museums. Rothberger also lost the title to his houses. After paying 96,215 Reichsmarks Reichsfluchtsteuer (Reich Flight Tax), Heinrich and Ella Rothberger emigrated on 2 November 1941 via Barcelona to Cuba. They were unable to reach the USA, their intended destination, after that country's entry into the war on 7 December 1941. After the war, they moved from Cuba to their sons in Canada. From there, Heinrich Rothberger attempted to recover his assets, which had been expropriated during the Nazi era or left in Vienna. In early 1947 he applied to the Austrian Federal Monuments Authority to export the objects in his porcelain collection that had not been expropriated or forcibly sold and were now being kept by the lawyer Limpens. Authorization was given for the export of thirty-two items. The Österreichisches Museum für angewandte Kunst (Austrian Museum of Applied Arts) objected to the export of two large bowls with "Schwarzlot" décor from the Vienna porcelain manufacturer Du Paquier. Limpens also applied in 1947 for the restitution of fifty items that this museum had acquired during the Nazi era from the Rothberger collection. After months of negotiations, a settlement was reached: thirty-one items and an enamel can were returned to their former owners, and Rothberger donated the other eighteen items to the museum. The two bowls with "Schwarzlot" décor also remained in the museum, and Rothberger obtained six Chinese porcelain bowls in return. The negotiations from January 1948 with the Albertina also ended in mid-July 1948 with a settlement: four original watercolours by Carl Schütz, which the Albertina had acquired in 1940 through Camillo Limpens, remained in the Graphic Art Collection. In return Rothberger received four engravings by Israhel van Meckenem. For some unknown reason, two etchings by Carl Schütz and Johann Ziegler, which the Albertina had acquired in 1941 through Gilhofer & Ranschburg, were not included in the restitution settlement. It is assumed that the two views of Stephansplatz by Rudolf von Alt went missing towards the end of the war. Rothberger sold the objects restituted in 1947/48 through the New York art dealer Glueckselig & Son. The expropriated properties on Stephansplatz, which had been badly damaged by fire in April 1945, were restituted to the Rothberger family and sold in the mid-1950s. After the fire, the Jacob Rothberger company Aryanized by Wilhelm Bührer existed in name only but was not deleted from the register of companies until 1967. Ella and Heinrich Rothberger and their sons continued to live in Canada and never returned to Vienna.

Since 2000, the Art Restitution Advisory Board has taken four decisions regarding the Heinrich Rothberger collection, on the basis of which by 2015 twenty-five porcelain objects from the MAK and two etching from the Albertina had been restituted to the heirs of Heinrich Rothberger, along with a Solitair service and a bowl with saucer from the Wien Museum, whose restitution was recommended by the Vienna Restitution Commission in 2002. In 2008, the Spoliation Advisory Panel in Great Britain recognized the claims of Rothberger's heirs to a porcelain object in the British Museum in London and one in Fitzwilliam Museum in Cambridge. In 2017 two porcelain figures from Museum Huelsmann Bielefeld were restituted to Rothberger's heirs. The 1879 watercolour by Rudolf von Alt Stephansplatz with the Rothberger House from the Rothberger collection was not lost after all in the Second World War. It was seized from Heinrich Hoffmann in 1945 and taken to the Central Collecting Point in Munich. As it could not be determined whether the work had been expropriated, it was returned to the Hoffmann family, who probably sold it. As the picture was released by the state authorities, its presently unknown ownership is legal. And yet it is an artwork expropriated during the Nazi era that has never been restituted to its former owner and his heirs.