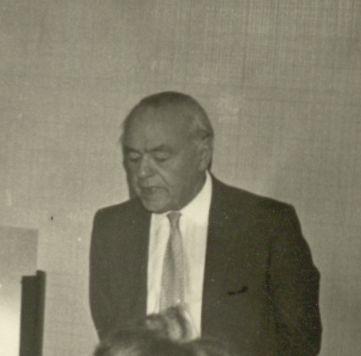 Valentin Viktor Rosenfeld studied law at the University of Vienna and obtained his doctorate in 1910. As a lawyer he represented footballers in contract disputes with their clubs. He was most well-known, however, as an official in the Jewish sports club Hakoah, one of the most successful sports clubs in Austria between the wars. It was founded in 1909 as an expression of the rising self-assurance of liberal Jews and as a reaction to the "Aryan paragraphs" introduced by other sports clubs. Rosenfeld joined the Hakoah swimming section in 1922 and after its transformation into an independent club in 1928 he was its president and the editor of the club newspaper. The address of the club headquarters was his office at Wipplingerstrasse 21 in the 1st district. In the 1920s, his wife and cousin Eva Rosenfeld founded a reform private school, the Hietzinger Schule, with Anna Freud and the US citizen Dorothy Burlington. After the couple separated, Eva Rosenfeld moved with their son to Berlin, where she completed psychotherapy training. In 1936 they emigrated to the UK. In early 1938 Valentin Rosenfeld visited his family in London and remained there rather than returning to Nazi Vienna. The Gestapo subsequently seized Rosenfeld's 3,000 to 4,000 volume library and autograph collection and transported some of it – a collection of Goethe manuscripts – to the Central Depot for Seized Jewish Collections in the Neue Burg. In September 1938 the National Library took over around 600 volumes owned by Rosenfeld in the form of an "assignment" from the Gestapo, followed by the Goethe collection in November 1938. Other parts of his library were dispersed via the Book Disposal Office in Vienna, an authority established by the Reich Propaganda Office for the distribution of seized books from Jewish bookstores, publishing companies and private libraries. Rosenfeld's ex libris bookplate had the inscription "I hate idle readers" under a portrait of Friedrich Nietzsche and the monogram "V. R.". After emigration he was able to arrange visas for a large number of Hakoah members, with the support of Sigmund Freud. The University of Vienna revoked Rosenfeld's doctoral degree on 22 July 1943 because under the Nazis he was deemed "unworthy as a Jew to hold an academic degree from a German university". It was not until 12 years later that the doctoral title was reinstated and the revocation declared "null and void from the outset".

In 1948 Rosenfeld addressed a claim to the Austrian National Library (ÖNB) for the return of his library. On 28 December 1948, the Provincial Tax Office for Vienna, Lower Austria and Burgenland ordered the restitution of 288 books, sheet music and autographs in the ÖNB. During the systematic provenance research in the ÖNB, four further autographs and two publications from the Rosenfeld collection were identified. On 20 November 2003 the Art Restitution Advisory Board recommended that these objects be returned to the heirs of Valentin Rosenfeld.