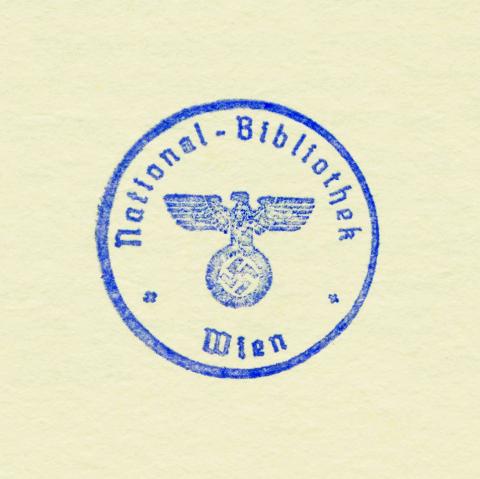 The year 1368 and the completion of the Johannes von Troppau Evangeliary marked the starting point of the Habsburg book collections. The magnificent manuscript is regarded as the founding stone of the Austrian National Library. It was not until 1575 that the first imperial court librarian was appointed, thereby turning the Habsburg book collection into an institution. A decisive turning point in the history of the court library came in the eighteenth century, when Emperor Charles VI ordered the conversion of the former riding school building on Josefplatz in Vienna’s 1st district into a library, which was completed from 1723 to 1726 according to plans by the court architect Johann Bernhard Fischer von Erlach. This imperial Baroque room was the first permanent site of the court library. It still exists today, albeit considerably enlarged. The First World War brought a break in the library’s history. With the end of the Habsburg Empire, the Central Library of the Austrian Empire became the National Library of the First Republic. Its contents became the property of the State and the former Familien-Fideikommissbibliothek des Hauses Habsburg-Lothringen was attached to the National Library as the "portrait collection".

On 16 March 1938, just a few days after the annexation of Austria to Nazi Germany, the Gestapo arrested Josef Bick, since 1923 director general of the National Library, and deported him to Dachau concentration camp. Bick’s arrest was a result of his political activities in the Austrofascist regime. In 1934 he was appointed president of the Bundeskulturrat (Federal Cultural Council) and vice-president of the Bundestag (federal parliament). Also on 16 March 1938, Paul Heigl, a committed Nazi, took over the important cultural office of director general of the National Library. In 1938 the library had around 1.3 million objects and was the largest library in the Ostmark and the third-largest after Berlin and Munich in the German Reich. Apart from the print collection, it had eight dedicated collections: the manuscript, papyrus, music, theatre, map and portrait collections, the picture archive and an Orient-South Eastern Europe department. The latter only existed during the Nazi period, its main task being as a depository for seized literature from South Eastern Europe. When the war broke out, trade and exchange with other countries was effectively excluded. Heigl attempted to make good this shortcoming with seized works. Numerically speaking, of the 70,000 shelf numbers assigned to printed works during the Nazi period, over 10,000 came from seized collections. Added to this were the expropriated volumes, whose numbers can no longer be determined today but were probably much greater, for which the National Library was merely a transit point. Because of the lack of time and personnel, a large number of the expropriated volumes were not given shelf numbers but sold, exchanged or transferred to libraries being established in the German Reich. Heigl’s good relations with the Gestapo, SS and SD were no doubt useful in his aggressive acquisition policy. Numerous applications by Heigl to the offices responsible for the seizure and sale of Jewish assets can be found in the library files. Between 1938 and 1945 400,000 to 500,000 looted objects are thought to have been added, only some of which were inventoried. Regarding the origins of the expropriated libraries, several groups of aggrieved parties can be distinguished. First, Jewish private individuals and institutions, such as the Vienna Jewish Community (IKG) and its affiliated provincial communities, were affected by the seizure of their libraries and collections. Among them were large private libraries and collections of Jewish persecutees, including the library of Oskar and Gerhard Ladner with 5,000 volumes, that of Harald Reininghaus/Stefan Auspitz with 4,800 volumes, the library and bookplate collection of Marco Birnholz with 1,500 volumes and 30,000 bookplates, the large collection and library of theatre history belonging to Fritz Brukner, the musical score collection of Gottlieb Kaldeck with over 6,000 items, the library of Heinrich Schnitzler with 6,000 volumes, Norbert Jokl’s 3,000 volumes and a manuscript collection, several thousand volumes belonging to Moritz Kuffner and the extensive private library of Alphonse Rothschild. The confiscated books of anonymous origins should also be taken into account. These included above all the small private libraries of emigrated or deported persecutees that they had left behind in their homes. Then there were the libraries of associations and organizations that opposed the Nazi ideology, such as the masonic lodges and the Psychoanalytischer Verlag. In accordance with the Regulation on the Confiscation of Assets Hostile to the Volk and the State in the Province of Austria of 18 November 1938, the libraries of cultural institutions and state departments in territories occupied by the German Reich were also seized. The largest of these claimed by the National Library was the library of the Komensky-Schulverein in Vienna with over 120,000 volumes. It was also assigned the libraries of Czech schools and the Czech Cultural History Commission in Vienna. When Vienna and the surrounding area suffered the first air raids in summer 1943, the National Library also considered storing its holdings. Since the start of the war, the most valuable objects had already been packed in 90 crates and secured in shelters in the basement of the National Library. In 1943 director general Heigl decided to store the books from the State Room (200,000 volumes, including the Bibliotheca Eugeniana) and the most valuable items from the collections in the basement underneath the State Room. It was not until the end of January 1945 that the employees of the National Library who had not been conscripted finally transported the most valuable manuscripts and printed works to Lauffen near Bad Ischl, while the contents of the portrait collection were moved to Pulkau in Lower Austria. Unlike the surrounding buildings such as the State Opera and the Albertina, the National Library itself did not receive a direct hit, although the bombardment by the US Air Force on 12 March 1945 caused minor damage to the music collection, picture archive and papyrus library.

The return of expropriated libraries after 1945 proved to be very complicated. The large libraries of known collectors and institutions that were still stored intact were relatively easy to identify and restitute. The search for duplicates that had been selected and removed for sale and the inventoried items proved more difficult. The Austrian National Library reported most of the known libraries to the relevant district administrative authorities in accordance with the Asset Expropriation Registration Regulation, but in very few cases could the extent and contents be precisely determined. Altogether, the Austrian National Library restituted around 5,420 items from seized and inventoried objects. Regardless of the fact that many illegally acquired books and collection items were still stored in the depots, the National Library ceased restitutions in 1950. It was not until 1998 and the promulgation of the Austrian Art Restitution Act that the subject of the incomplete restitutions from federal property was taken up again. On the initiative of director general Johanna Rachinger, appointed in 2001, a project was initiated in 2002 to identify objects looted by the Nazis. During the project, there was a general examination of the suspicious holdings, comprising 150,000 printed works and 50,000 collection items. The provenance research also made use of internal inventories, accession books and archives, not least the complete archive of the general management department, which proved to be an invaluable source. The allocations of large and valuable libraries and collections were well documented, but there were only minimal records, if at all, of the countless printed items and objects from the small collections of expelled or deported persecutees. On completion of the work, 52,403 objects – books, photos, negatives, autographs, manuscripts, maps and music scores – were identified as having been acquired under suspicious circumstances during the Nazi period. A list drawn up in 2002–2003 of around 800 ownership marks of private persons and institutions formed the basis for further research. In 72 cases it was possible to research the expropriation history and the fate of the persecutees. Around two-thirds of the 52,403 objects are connected with these major cases.

Since the start of the project in 2002, 56 cases have been completed and 49,591 objects restituted, including 11,005 printed items and maps whose provenance is unknown on account of the absence of ownership marks and thus in accordance with the Art Restitution Act are to be handed over to the National Fund of the Republic of Austria for Victims of National Socialism for disposal.