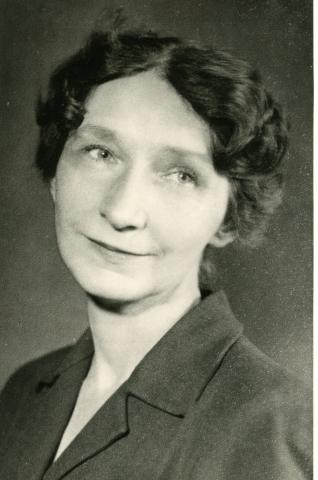 Elisabeth Maria Gasselseder was born in Vienna on 13 November 1903 as the daughter of the assistant notary Ferdinand Laurenz Gasselseder and his wife Gabriele Ida Olga, née Szendrödy. After a few semesters at the University of Vienna, in which she attended lectures on classical archaeology and art history, she began in November 1942 on the initiative Herbert Seiberl to work as a research assistant at the Institut für Denkmalpflege (Institute for Monument Preservation). She was concerned with library and export matters as well as art valuations in private homes for the private salvaging operations taking place from August 1943. The Institute seconded Gasselseder in July 1944 and again from February to November 1945 to Altaussee Salzbergwerk to look after the art and cultural assets stored there by the Institute. After returning to Vienna, she resumed work on 5 November 1945 in the Staatsdenkmalamt (State Monuments Authority) and devoted her attention to making a record of the damaged and extensively destroyed buildings in Vienna's 3rd district. In August 1948 the Bundesdenkmalamt (BDA) (Federal Monuments Authority), as it was now, appointed her to identify Austrian art objects that had been transferred by the US military government in 1945 from Altaussee to the Central Collecting Point (CCP) in Munich. She replaced the art historian Gottfried Kreuz, who had become ill and died in September 1948, and the young art historian Johann Morawitz, who left the BDA in early summer 1948. To have works returned to Austria, they had to be recognized by the US authorities as having been expropriated or sold of necessity during the Nazi era. To provide evidence of this, Gasselseder worked under considerable pressure, because the CCP was expected to close in August 1948 and it was feared that the Austrian works would then remain in Bavaria. The result of her work was a catalogue of the sought-after art works from Austria, including those reported to the BDA as lost or expropriated, which provided a basis for the transfer of the remaining works from Munich to Austria. Gasselseder gave the catalogue in December 1948 to the US military authorities. From January to the end of April 1949, she was again in Munich on behalf of the BDA, initially supported by the BDA employee and art historian Waltraud Blauensteiner and then, from March 1949, when her residence permit in Munich was not renewed, replaced by Blauensteiner. Despite the difficulties with the CCP and the fact that Gasselseder completed most of the work in Munich on her own, her achievement was almost entirely ignored. The repeated efforts by her supervisor Otto Demus and the art historian Hans Sedlmayer to obtain a promotion for Gasselseder into a higher pay grade as an academic on account of her "rich experience and dependability in assessing artworks", they were unsuccessful on account of the absence of formal scholastic qualifications. She worked until the end of 1968 in the BDA export department and library and died on 23 January 1969, a few weeks after her retirement.