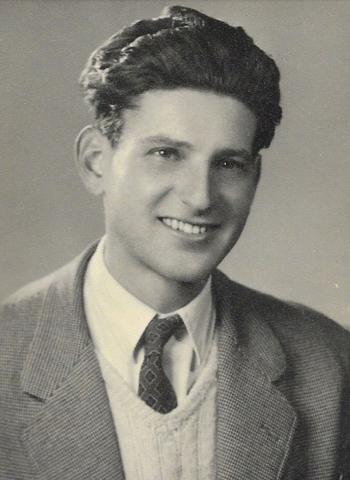 Johann Hugo Wilhelm Morawitz was born in Lojowitz (Lojovice) near Prague as the second son of Edgar Ritter von Morawitz, former lieutenant in the Austro-Hungarian army, and Kunigunde Elisabeth Mercy Austerlitz. In August 1939 Johann and his brother Thomas Morawitz took Spanish citizenship to enable them to flee from what became the Protectorate of Bohemia and Moravia. In early 1940 the brothers emigrated to Spain to their father, who had lived since 1926 in San Pedro de Ribas near Barcelona as a man of private means, racing car driver and owner of the Autodromo de Sitges-Terramar. By leaving for Spain, Morawitz was obliged to discontinue his secondary school education at the Lyceum Alpinum in Zuoz, Switzerland. He took the school-leaving examination in Barcelona in 1943 and then, according to his own information, studied for six semesters at the School of Architecture in Barcelona. He broke off his studies and returned to Austria in May 1946, living initially in Salzburg with his mother, remarried name Countess Kunigunde Nostitz in 1928.

On 1 November 1946 he was employed as a research assistant at the Bundesdenkmalamt (BDA) (Federal Monuments Authority), where he helped with the registration and repatriation of artworks. On 12 November 1947 he travelled as Austria's representative to the Central Collecting Point (CCP) in Munich on behalf of the Bundesministerium für Vermögenssicherung und Wirtschaftsplanung (Federal Ministry for Securing Property and Economic Planning) together with the art historian Anna Spitzmüller (Graphische Sammlung Albertina). His task was to determine the whereabouts of artworks that were in Austria before 13 March 1938 and had been expropriated from their legal owners during the Nazi period. He identified 20 paintings, 61 miniatures, 50 antique jewellery items, 19 statuettes and applied artworks worth 3.5 million schillings. In January 1948 he was sent again to Munich for six weeks. After the art historian Herbert Stewart Leonard, head of the CCP and the Monuments, Fine Arts and Archives Section of the Office of Military Government for Bavaria, had authorized the return of the artworks to Austria, Morawitz accompanied the transport on 15 March 1948 from Munich to Salzburg to the Amt für Vermögenssicherung (Office for Securing Property) of the provincial government there. A further transport supervised by Morawitz was planned for the end of April 1948. But as he resigned from the BDA on 15 June 1948, Elisabeth Gasselseder was sent to Munich in his place in August 1948.

Although Morawitz was highly acclaimed by Ernst Buschbeck, curator of the Picture Gallery at the Kunsthistorisches Museum in Vienna, for his work at the CCP, he described his work in Munich as "very arduous and not gratifying". After his resignation, he enrolled for the winter semester 1948/49 as a regular student in the Philosophy Faculty of the University of Vienna and attended lectures on art history, history and philosophy. He did not complete his studies. After the Velvet Revolution in 1989, he successfully claimed restitution in 2006 of the family assets, which had been expropriated in December 1942 and had remained in the Czech Republic. The property itself, which had been last owned by her mother and stepfather Count Franz Anton Nostitz-Rieneck, has been used since the end of the Second World War as the residence of the Austrian Embassy in Prague.