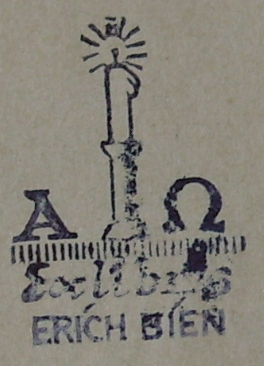 The insurance clerk and Prokurist Erich Bien obtained a doctorate in law from the University of Vienna in 1908. Because of his Jewish origins, he was dismissed from Kosmos Versicherungs AG in Vienna at the end of July 1938. He was detained for several days by the Gestapo in November 1938 and fled the following year to Britain, taking with him his artworks, probably mostly watercolours, having received export authorization from the Zentralstelle für Denkmalschutz (Central Monument Protection Authority). He died in 1940, shortly after his arrival in exile in Wales.

Five volumes of prints that Bien had apparently not been able to take with him were restituted by the University of Vienna library in 2013 to his legal successors. His ex libris stamp is also to be found in two books in the Württembergische Landesbibliothek (Württemberg State Library) in Stuttgart, and in four prints in the Österreichische Galerie library, which were acquired in 1939 and 1945 from Antiquariat und Buchhandel Deuticke in Vienna. Their restitution was recommended in 2014 and given to the Österreichische Galerie library as a gift in 2022 by the heirs of Erich Arthur Bien.