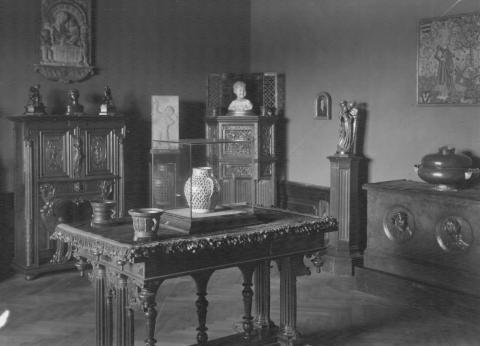 Gustav Benda was born in 1846, the second of four children of Samuel and Julie Benda, in Prague, where his parents managed the Wiener leather goods company. In 1869 he became a partner and retail commissioner and forwarding agent in the newly founded company Waldek, Wagner und Benda, which specialized in the distribution of technical equipment. While the co‑founders Franz Waldek and Justus Friedrich Julius Wagner worked in Prague, Benda managed the office at Opernring 10 in Vienna's 1st district. From the 1880s at the latest, the successful industrialist, who never married, collected art. He preferred Italian Renaissance sculptures and bronzes but also acquired paintings, miniatures, furniture and historical weapons, which he kept in his apartment at Opernring 8. He had good connections in the art world and was acquainted with Gustav Glück, director of the Painting Gallery of the k. k. Kunsthistorisches Hofmuseum, and the collector Albert Figdor, and also corresponded for almost two decades with the Berlin museum director Wilhelm von Bode. He occasionally loaned objects for exhibitions and from 1886 to 1910 was an active member of the Gesellschaft bildender Künstler Österreichs, Künstlerhaus. Between 1905 and 1911 he gave twelve artworks to the k. k. Kunsthistorisches Hofmuseum, including a stately cabinet owned by Prince Eugene, statuettes by Georg Raphael Donner and several paintings. At the request of Archduke Franz Ferdinand, Benda was appointed in 1911 to the Denkmalrat (monument council), the advisory committee of the Zentralkommission für Denkmalpflege (Central Commission for Monument Protection), ennobled in the same year, and in 1914 appointed to the board of the k. k. Österreichisches Museum für Kunst und Industrie (Imperial Royal Austrian Museum of Art and Industry). On 13 November 1919 members of the Staatsdenkmalamt (State Monuments Authority) visited his apartment at Opernring 8 and confirmed the "enduring public interest in the art treasures there". The report stated that Benda's art collection included paintings by Lorenzo Lotto, Francesco Guardi, Bartolomé Estéban Murillo, Pieter de Hooch and Ferdinand Georg Waldmüller, and sculptures by Donatello, Desiderio da Settignano, Luca della Robbia, Agostino di Duccio and Andrea del Verrocchio. Benda died on 7 February 1932, leaving behind a will written in 1930 in which he bequeathed his collection to the Kunsthistorisches Museum (KHM) in Vienna with the instruction that it be arranged as it was in his apartment and if possible displayed in its own room. The art objects from the lobby and dining room and the porcelain were bequeathed to the Österreichisches Museum für Kunst und Industrie. The objects in the KHM were displayed that year in the Ringstraße wing of the Neue Burg. The Benda collection had its own inventory and was attached "as an independent annex to the sculpture and applied art collection". A guide, Führer durch die Sammlung Gustav Benda, was published to accompany the exhibition in 1932, and in 1937 the collection was transferred for reasons of space to the second floor of the main KHM building.

Although Benda himself was no longer alive to experience persecution by the Nazi regime, his nieces and nephews, who, like him, were of Jewish origin, were not always as fortunate. Hans Kauders, who lived in Munich, managed to escape with his family to Switzerland in 1933. Gertrud Kauders from Prague was deported on 12 May 1942 to Theresienstadt and five days later to Lublin, where she perished. Irma and her husband Maximilian Monter lived in Vienna. They had converted to Catholicism and had attempted unsuccessfully, with reference to the generous donation by their uncle, to avoid deportation. They were deported to Theresienstadt on 20 June 1942, where Maximilian died on 2 October of that year. Irma was transferred on 15 May 1944 to Auschwitz and murdered there. Irma's sister Hedwig had married the Sudeten German doctor Franz Luksch, who was a Catholic. It is unclear whether this protected her from persecution, nor are the time and place of her death known. Although Gustav Benda left the Jewish Community in 1895 and probably did not consider himself to be Jewish, and although the Nazi laws did not explicitly demand it, Fritz Dworschak, provisional director of the KHM, dismantled Benda's legacy in 1939, distributed the works among various KHM collections and transferred them to the Staatliches Kunstgewerbemuseum (State Arts and Crafts Museum), the Albertina, the Österreichische Galerie and the Volkskundemuseum (Museum of Folk Life and Folk Art). According to an essay published in 2014 as part of the systematic provenance research, there are still 187 art objects from Benda's collection in the KHM, 62 in the MAK, eleven in the Albertina, eight in the Österreichische Galerie Belvedere and two in the Österreichisches Volkskundemuseum.