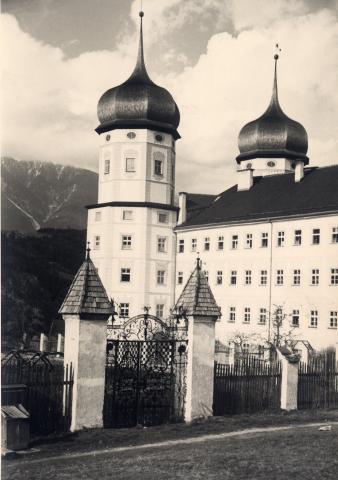 The Cistercian abbey at Stams in Tiroler Oberland was founded in 1273 by Count Meinhard II of Görz-Tirol and his wife Elisabeth of Bavaria as a place of burial for Tyrolean rulers. The baroque and rococo interior dates from 1650 and 1750. The abbey was dissolved in 1807 during the period of Bavarian occupation and did not function again as an abbey until 1816 when Tyrol became part of Austria again under Emperor Francis I. The Nazi authorities seized the abbey in 1938 and dissolved it a year later. Significant art objects, including coins, ex libris, musical scores, instruments and manuscripts were incorporated between 1941 and 1943 in the collections of the Tiroler Landesmuseum Ferdinandeum and remained there until the end of the war. The most valuable objects from the Ferdinandeum were transported at the end of 1942 to Ambras Castle. In March 1944 the Reichsstatthalter of Tyrol and Vorarlberg ordered the castle to be cleared within three days, after the rerouting of the Brenner railway took it close to the village of Amras, thereby increasing the danger of bombardment. Most of the contents were to be moved to Stams Abbey and its collegiate church. A small selection of the objects from the Tyrolean Folk Art Museum were stored there as well. The abbey also housed people who had been resettled from South Tyrol ("Optants") and also refugees towards the end of the war. The Cistercian monks returned to the building in 1945 after the war.

According to a report from the director of the Tyrolean Folk Art Museum Karl Moeser and the supervisor of the Ferdinandeum Franz Staud, the depot was broken into on 3 May 1945 and various crates opened. The looting did not cause major damage to the museum objects, however, and only a few items (books and some pieces of furniture) were stolen. In summer 1945 the salvaged objects were returned to the museums in Innsbruck.