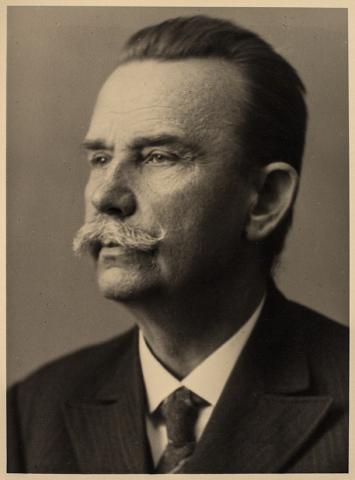 Otto Reich studied history and the history of art at the University of Vienna, obtaining his doctorate in 1903 with a thesis entitled "The relationship of Frederick the Fair of Austria with Italy and Curia". Following a four-month residence at the Istituto austriaco di studi storici in Rome, he was appointed librarian at the k. k. Akademie der bildenden Künste in Wien (Imperial Royal Academy of Fine Arts in Vienna) in 1905, where he remained until he retired. In 1909 he also became a sworn expert in oil studies, watercolours, drawings and reproductions for the Dorotheum and the Landesgericht (provincial court) in Vienna. After military service during the First World War, he became director of the library of the Academy of Fine Arts. In subsequent years he was responsible above all for reorganizing the library, in particular cataloguing the drawing, print and photograph collections of the present-day Graphic Collection.

Reich belonged to Georg von Schönerer's Pan-German League and converted in 1899 from Roman Catholicism to Protestantism with the founding of the Away from Rome movement supported by von Schönerer. He subsequently joined various German academic fraternities. He was a member of the Austrian NSDAP from 17 June 1933 and after it was banned he offered financial support for "aggrieved Party comrades and their political activity", for which he was awarded the Medaille zur Erinnerung an den 13. März 1938 (Annexation Commemorative Medal) in 1940. He was also a Patron Member (Förderndes Mitglied) of the SS and joined the NSV and NS-Altherrenbund. During the denazification proceedings after the war, Reich was removed from office as library director on 23 July 1945 and dismissed without a pension on 28 February 1947. A year later his dismissal was reversed. Reich was classified as a lesser offender and awarded a lifelong pension in February 1948.