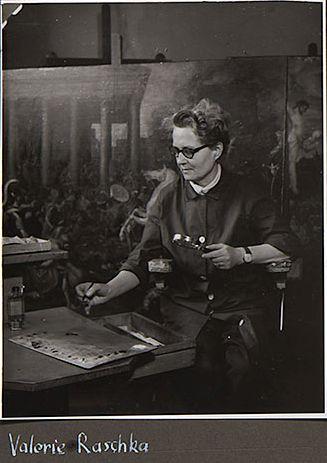 After training in the Department of Ornamental Lettering and Heraldry at the Academy of Fine Arts (1927–1930) and the School of Arts and Crafts in Vienna (1931–1932), Valerie Raschka worked independently as a graphic artist but also in the State Trade Promotion Institute (Staatliches Gewerbeförderungsinstitut) in Vienna. From 1940 to 1942 she was employed as a graphic artist in the building department of the Vienna Governor's Office and from 1942 in the Kunsthistorisches Museum (KHM), first as a graphic artist and later as a technical restorer. She was also employed in the seized and expropriated Monastery of the Augustinian Canons in Klosterneuburg, where art and cultural objects were stored from autumn 1942. In Klosterneuburg she made a copy of the Verdun Altar. From January 1943 she was responsible for objects stored in the monastery, verifying the state of paintings and carrying out the necessary restoration work. In 1944 she worked in the restoration workshop of the Kunsthistorisches Museum Picture Gallery. She was an applicant for the Nazi Party from 1938 to 1940 and on 2 May 1941 was issued NSDAP membership (number 6,226.974). In 1945 she was obliged to register under Section 4 of the Prohibition Act, but was allowed to remain as one of 13 public servants and contract employees at the KHM and was classified by the district municipal department as a lesser offender. A report by the museum to the Federal Ministry of Education after the war described her as an irreplaceable and "exceptionally talented worker" who was "not the slightest politically active but always in opposition". Raschka worked until 1971 as a technical restorer at the KHM focusing on Italian and Flemish Baroque painting. When she was awarded the title of professor in 1971 on the recommendation of Friderike Klauner, director at the time of the Picture Gallery, it was pointed out that she was the only student of Josef Hajsinek to "initiate a new form of artistic restoration".