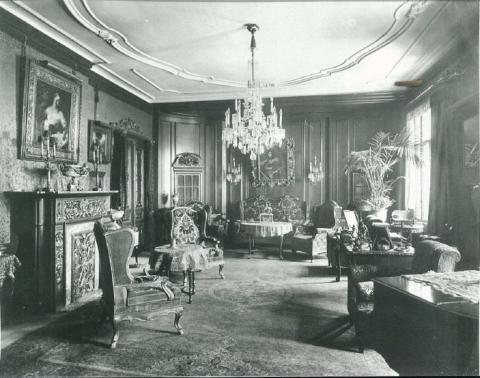 Irma Löwenstein, née Sametz, lived with her husband Oscar (also Oskar) Löwenstein, founder of the Neues Wiener Journal at Landstraßer Hauptstraße 88 in Vienna's 3rd district. A successful publisher, he amassed an art collection over the years and gave it to his wife in 1934. After the annexation of Austria to the German Reich, the Löwensteins were persecuted by the Nazis because of their Jewish origins and had to make asset declarations to the Vermögensverkehrsstelle (VVSt) (Property Transaction Office). The art expert Emmerich Schaffran valued Irma Löwenstein's collection of paintings (including works by Ferdinand Georg Waldmüller, August von Pettenkofen and Pietro Perugino), watercolours, prints, applied art, silver and carpets in June 1938 at around 80,000 Reichsmarks. In preparation for flight, Irma Löwenstein applied to the Zentralstelle für Denkmalschutz (Central Monument Protection Office) in August 1938 for permission to export the collection. After Irma and Oscar Löwenstein had emigrated initially to Brussels and from there to their stepson Wilhelm Hübsch in London, the VVSt brought charges against them in October 1938 for "concealment of assets". It accused them specifically of not having declared a Bösendorfer grand piano, of shipping four paintings without authorization to London, and of giving away three objects and selling the painting Village Scene by Joost Cornelisz Droochsloot without permission. In summer 1938 Irma and Oscar Löwenstein had sold three Waldmüller paintings to Maria Almas Dietrich to raise money. According to the VVSt, this sale had been "properly declared". On 27 November 1939, the Reichsfluchtsteuerstelle (Reich Flight Tax office) demanded around 58,000 Reichsmarks from the Löwensteins, who had already emigrated; including arrears and fees, the claim had increased by 1944 to around 127,000 Reichsmarks. This amount was directly debited in 1944 from the Löwensteins' frozen account and credited to the account of the Innere Stadt-Ost tax office. From the transport goods stored under the stepson's name with Spedition Oberndorfer, Bellariastraße 10, the Gestapo seized two crates with bronzes, applied art and four paintings (Adrian van der Werff, Schön, Charlemont, Gérard).

After the war, Irma Löwenstein, widowed since 1942, attempted to have her property restituted. In 1948, now under the name Brunninghausen, she sought to find the whereabouts of the painting Duel in the Au, which she had left in safekeeping with acquaintances in Vienna. It transpired that the painting had been auctioned in 1940 in Galerie Artaria, but its whereabouts could not be ascertained. In 1956 Irma Austin-Löwenstein (now remarried) applied to the Republic of Austria for restitution of the artworks seized by the Gestapo in 1941. The Republic of Austria in turn applied for their restitution from the Federal Republic of Germany (FRG). The application was rejected in 1959 because of lack of evidence that the painting was in the FRG. The three Waldmüller paintings, The Beggar, Visit of the Grandparents and Wine Festival in a Tavern, which the Löwensteins had sold under pressure in summer 1938 to Maria Almas Dietrich, had become the property of FRG after the war via the Central Collecting Point in Munich after Almas Dietrich had made them available to the "Sonderauftrag Linz". They were returned to the legal successors of Irma Austin-Löwensteins in 2019.