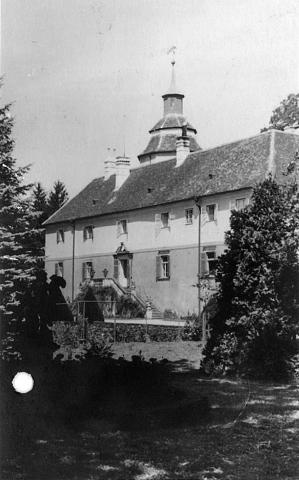 Sonnberg Castle, mentioned in records for the first time in the twelfth century, was rebuilt in 1596 in the Renaissance style as a three-storey building with a gate tower and rectangular courtyard. It was owned from 1934 by Anton Habsburg-Lothringen (1901–1987) and his wife Ileana, née Hohenzollern-Sigmaringen (1909–1991), daughter of the Romanian king Ferdinand I (1865–1927). In August 1942 Ludwig Berg visited the castle with members of the Staatliches Kunstgewerbemuseum in Wien (State Arts and Crafts Museum in Vienna, now the MAK) to determine whether it was suitable as an art depot. The owners made available four rooms, in which sixty objects from the Arts and Crafts Museum, particularly furniture, were stored. In early 1943 a field hospital was installed in the castle. In the last days of the war, German troops removed some objects from the Arts and Crafts Museum. Seven of them turned up later in Maissau and were returned from there to the museum in September 1945. The castle remained unscathed during the war and was not occupied by Soviet troops until after the end of the fighting. Some of the art objects stored there were damaged and destroyed when the troops were being billeted there. There was also apparently a certain amount of looting by the local population. The objects were returned to the Arts and Crafts Museum in 1945 and 1946. Some items were severely damaged, including the cradle belonging to the empress Maria Theresa, only fragments of which have survived. The thirty objects from Sonnberg that had disappeared were written off as war losses.