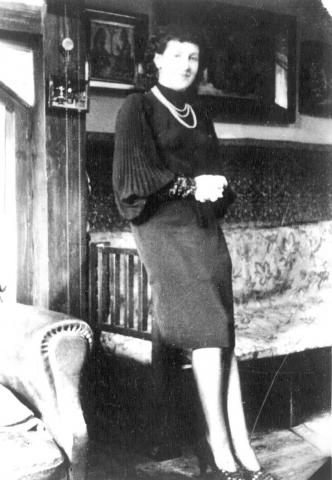 Liselotte Seutter von Loetzen, daughter of a bank director who died young and a potter, had considerable (professional) experience, when she became involved in the "Sonderauftrag Münzen" in October 1942. She had lived from 1930 to 1933 on Java during her brief marriage to a medical officer in the East Indian Army, acquired Dutch nationality and learned Dutch and Malay to supplement her knowledge of English and Italian. After the divorce in July 1933, she moved to her mother in Vienna. Before and after her marriage, she had worked as a saleswoman in Venice and Florence, where she became managing director of Swedish Artid G.m.b.H. Vienna in 1937/38. The following year she worked as a trustee for British Arted Plastic Ltd. Vienna in 1938/39 and then, in 1941/42, as technical secretary at the Institute of Physiology and Anatomy at the University of Natural Resources. In 1942 she was a nursing assistant with the German Red Cross. When she applied for German citizenship in 1940, a political assessment was requested from the Gau headquarters in Vienna, which stated that she was neither a member of the NSDAP nor an applicant for membership. Fritz Dworschak, head of "Sonderauftrag Münzen" hired her as a secretary initially because of her language skills. Although she had no formal training, thanks to her organizational skills she was quickly entrusted with the collection and management of the library of the planned coin collection in Linz. For that purpose she spent several months in the Reichskunstdepot Kremsmünster und and travelled to the monasteries dissolved by the Nazi regime in Vorau, Rein and Wilhering in order to select numismatic literature. After the war, she worked as a volunteer in the Coin Collection of the Kunsthistorisches Museum in Vienna, but was not taken on as a permanent employee. Little is known of her life after 1945. From 1951 to 1955 she worked as a librarian for the US authorities and in 1956 she applied again unsuccessfully for a position at the Kunsthistorisches Museum.