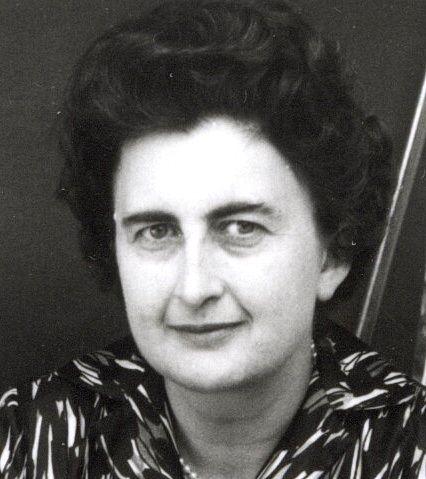 Edith Podlesnigg was enlisted from the start of 1939 until summer 1942 for war service in Vienna in the air raid warning service, first in the police and then in the Luftwaffe. In the winter semester 1942/43 she enrolled as a student of ancient history, history, archaeology and prehistory, and the history of art at the University of Vienna, but was forced to break off her studies to continue in the Luftgaukommando until the end of the war. In 1947 she was awarded a doctorate with a thesis on representatives of the Second Sophistic and their attitude to state and community. In 1948 she started working as a research assistant at the Bundesdenkmalamt (BDA) (Federal Monuments Authority) and helped until April 1949 with the registration, identification and restitution of expropriated artworks and with the management of depots in Vienna and Lower Austria. Her primary task was to document Austrian assets expropriated during the Nazi period to enable the objects in the Central Collecting Point (CCP) Munich to be handed over to the Republic of Austria. On 20 January 1952, the Allies handed over 967 artworks to the BDA. The objects were stored at Schloss Kleßheim near Salzburg. At the same time, the BDA entrusted Edith Podlesnigg with the administration of stored objects destined for restitution. In 1961 she accompanied the transfer of the 967 artworks from Munich previously stored in Kleßheim and the Residence in Salzburg to the specially adapted rooms in the Januariuskapelle at Ungargasse 69 in Vienna's 3rd district.

In 1965 she managed the clearance of all BDA depots (Löwelstraße 20, 1st district; Neue Burg, 1st district; Ungargasse 69, 3rd district, Januariuskapelle, 3rd district; Arsenal 15, Amtliche Werkstätten, 3rd district) and supervised the transports of artworks to the Kartause Mauerbach in preparation for the drafting of the first Kunst- und Kulturgutbereinigungsgesetz (KKGB) (Determination of Ownership of Works of Art and Cultural Assets Act), which entered into force on 1 September 1969. Following an inquiry by Simon Wiesenthal, at the time head of the Documentation Centre of the Association of Jewish Victims of the Nazi Regime, and by agreement with the Finanzlandesdirektion (FLD) für Wien, Niederösterreich und das Burgenland (Provincial Tax Office for Vienna, Lower Austria and Burgenland), Podlesnigg drew up a list in 1966 of all unclaimed artworks stored by the BDA. These 8,422 items were published on 2 September 1969 in the Amtsblatt zur Wiener Zeitung. Persons who recognized assets expropriated by the Nazi regime were able to file claims with the FLD. It was up to the Landesgericht für Zivilrechtsachen (provincial court for civil law matters) in Vienna to decide whether the objects should be restituted and it frequently commissioned the restitution department of the BDA to investigate further. After the first KKGB entered into force, Podlesnigg continued to manage the Mauerbach depot and assisted in the court cases. From 1969 until the end of the registration deadline in 1972, she dealt with over 200 inquiries under the first KKGB. She testified from 1973 on several occasions as a representative of the monuments authority – for example regarding the restitution claims of Alice und Gideon Kantor, Rosette Gorog, Nikolaus and Christine Winter and Walter B. Maas. The BDA returned 269 objects to their legal owners under the first KKGB. In the late 1970s, there were still over 8,000 artworks and cultural objects stored in Mauerbach, which had become the property of the state under the first KKGB. The most valuable works were distributed among federal museums, the National Library and the State Archives. In autumn 1980, Podlesnigg supervised the transfer of these objects and in 1981 the transfer of the remainder to the FLD. She retired in 1984 with the award of the professional title of "Hofrat".