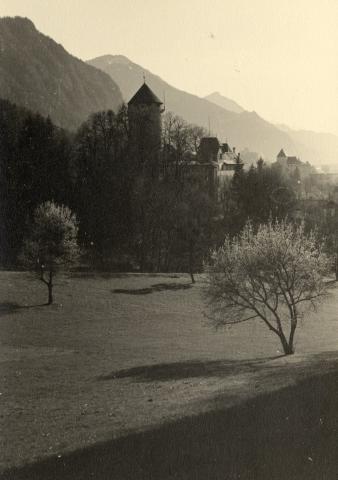 Lichtenwerth was built in the twelfth century on a rock in the middle of the Inn. It is the only authentic water tower in Tyrol. Since 1879 it has belonged to the Freiherr Inama-Sternberg from South Tyrol. The Tiroler Landesmuseum Ferdinandeum has a long connection to the Inama-Sternegg family. Apart from many gifts to the museum in the nineteenth century, some family members were active in the museum association. From 1923 to 1931 Karl Inama-Sternegg was director of the Ferdinandeum in Innsbruck.

Consideration was given to the salvaging of the Prehistoric Collection already in early 1942, and again in December 1943. The following month, the prehistoric objects were packed and transportable objects from the collection taken to Lichtenwerth. Later, after the depot at Schloss Ambras had been cleared, some of the crates with glasses, books, etc., were taken there. After the war, the objects were returned. In October 1945 the museum sent several reminders to the transport company Hueber to return the books from Lichtenwerth as rapidly as possible.