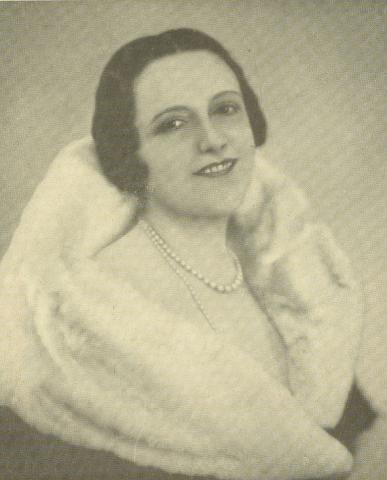 Frida Beck's first marriage was to Julius Ripper (1878–1916), with whom she had a daughter Edith. After her husband died in the First World War, in February 1918 she married Robert Gerngross, who managed the Gerngross department store with his younger brother Paul. Their daughter Maria was born the same year. Frida and her family lived a bourgeois existence, spending the summer vacations in Bad Ischl, Semmering or Karlsbad (Karlovy Vary) and holding receptions at their apartment at Reichsratsstraße 17 in the 1st district. Under the pseudonym Maria Gardi she performed as a concert singer in the late 1920s and early 1930s, in particular with the Frank Fox Dance Orchestra, also known as Wiener Graben Café, and the Dajos Bela Dance Orchestra. Already in the early 1930s, the Gerngross department store was the target of attacks by the National Socialists on account of its Jewish ownership, including a tear gas and stink bomb attack on the "Golden Sunday" shopping day just before Christmas 1932, when several people were injured.

After the annexation of Austria, Alfred Ludwig & Co. Aryanized the department store and continued to run it under the name "Kaufhaus der Wiener". In his asset declaration of June 1938, Robert Gerngross listed securities, jewellery and a small coin collection. Frida Gerngross also listed the house at Reichsratsstraße 17, two motor vehicles, a Gräf & Stift and a Lancia, which were seized by SS and Gestapo, respectively, along with antique furniture, Asian art and some valuable tapestries, as well as numerous pictures, including The Finding of Moses by Marcantonio Franceschini an. In early 1940 Frida Gerngross offered a Promberger fortepiano to the Kunsthistorisches Museum (KHM) Historic Instrument Collection for 2,000 Reichsmarks. The museum purchased it in March 1940 for 550 Reichsmarks via the instrument dealer Anton Jirowsky. The piano was not listed in the asset declarations of Frida or Robert Gerngross, but there are two spinets and a grand piano in the declaration of their daughter Maria. She lived until 26 January 1939 at Reichratsstraße 17/1/2/5 before fleeing to Prague. On 29 May 1942 she was deported to Ravensbrück and then to Auschwitz, where she perished on 25 January 1943. Her parents had to move to collective housing at Lichtenfelsgasse 5 in the 1st district in early 1942 from where they were deported a few days later to Izbica ghetto in Poland.

Frida Gerngross was declared dead in 1947 on the application of her daughter from her first marriage, now Edith Neumann. She had managed after the annexation to flee to Oslo, where she married Adolf Neumann from Vienna. She died in Vienna in 1980. The provenance of the pianoforte acquired in 1940 was only determined after the systematic research into the KHM Historic Instrument Collection, as it had not been reported as expropriated in 1946. On 15 October 2015, the Art Restitution Advisory Board recommended the restitution of the fortepiano to the legal successors of Maria Gerngross. The whereabouts of the art objects and valuables in Frida's asset declaration remain unknown.