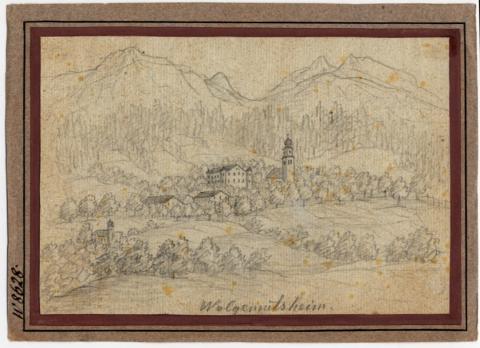 Schloss Wohlgemutsheim in Baumkirchen im Inntal originated as a thirteenth-century keep. In 1474 it was transformed into a castle, and the Holy Trinity chapel was added in 1517. In the late sixteenth century Archduke Ferdinand II of Tyrol bought the castle for his second wife Anna Gonzaga, and in 1622 it was acquired by the Damenstift (nuns' chapter) in Hall. After the chapter was abolished by Emperor Joseph II in 1783, the Galen Wohlgemutsheim family acquired the castle and owned it until 1959. Today it belongs to the Austrian Province of the Congregation of the Daughters of Mary Help of Christians. It is a three-storey cuboid building with a high hipped roof and slanting corner oriels linked to the front of the gable.

Because of the distance from Innsbruck, Schloss Wohlgemutsheim was thought suitable for storing private and ecclesiastical art and cultural objects to protect them from destruction in air raids towards the end of the Second World War. At the end of 1944 and beginning of 1945, the Ferdinandeum organized the transport of art objects from the Theresianisches Damenstift in Innsbruck (eight paintings), Innsbruck Cathedral (seventeen paintings) and St. Jakob parish church (twenty-four processional banners and accessories) and private goods (paintings) to the castle. Unfortunately there is sparse information concerning their return, which is thought to have been concluded in 1946.