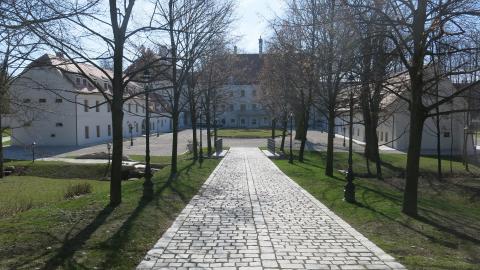 Thalheim bei Kapelln castle in Lower Austria was first mentioned in the twelfth century. After numerous changes of ownership, it was acquired in 1881 by the president of the Anglobank Guido Elbogen (1845–1918), son of the Jungbunzlau rabbi Isak Elbogen (?–1883). In 1923 it was inherited by his daughter Jenny Weleminsky, who lived in Prague with her husband Friedrich, whom she had married at the castle in 1905. She was a well-known Esperantist and had translated numerous works of literature into Esperanto. The castle was foreclosed in 1939 and acquired by a businessman from Germany called Alfred Laumayer. In 1942 the castle was spotted by the Wiener Städtische Sammlungen. It met the requirements for depots published in a decree by the Reich Minister for Science, Education and Popular Education of 12 May 1942. It was in an inconspicuous location, was not near military objects or war-industry factories and was an extensive complex with dry and lockable rooms. In August 1943, after the Historisches Museum had been closed for the duration of the war on account of the first air raid on Wiener Neustadt, the museum and city library started to store items in the castle.

Towards the end of the war, civilians fleeing from the Soviet army passed through the complex and looted some of the contents. Then the Red Army set up a field hospital there. The Soviet soldiers threw the museum items in a tool shed from which a large number of objects were stolen by the soldiers and the local population. As a result, almost all of the items stored in Thalheim went missing.

In a decision by the Restitution Commission at the Landesgericht für Zivilrechtssachen in Vienna in 1959, the land and castle were returned to the legal successors of Jenny Weleminsky. The Aryanizer Alfred Laumayer was living at the time as a businessman in Medellin, Colombia. Jenny Weleminsky had managed to flee to Great Britain in 1939, where she continued to translate books into Esperanto and taught English to other refugees. She died on 4 February 1957 in London, before her property was restituted.