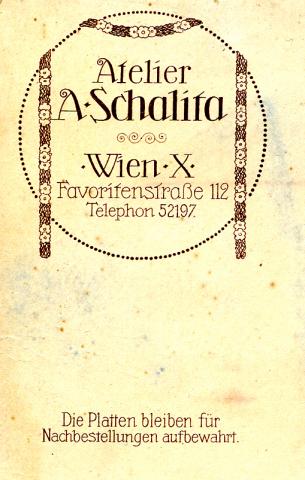 Arnold Schalita, son of Meier Schalita and Maria Schalita (née Orlova), lived from 1904 in Vienna and was married to Frieda Schalita (née Prager, born 1882). Until 1938 their home was Am Fasangarten 31 in the 12th district. Schalita became a commercial photographer in 1905. He joined the Photographische Gesellschaft in Vienna in 1913 and took part in exhibitions from 1912 onwards – including Kind und Kunst in Vienna in 1912 and the Hagenbund photo exhibition in 1930 – and published in magazines such as Radio-Wien. From 1905 he owned a studio at Favoritenstraße 112 in the 10th district and in 1929 extended his activities to include trade in photographic accessories. As he was of Jewish origins, he and his wife were persecuted by the Nazis after the annexation of Austria to the German Reich. His studio lost its trade licence on 13 July 1938 and was placed under temporary administration. After Josef Detoni, long-standing publisher and editor-in-chief of the Allgemeine Photographische Zeitung, the mouthpiece of the photographers' guild, had estimated the studio's value, it was Aryanized on 1 December 1938 by the photographer Karl Müller, a member of the NSDAP, with the approval of the Vermögensverkehrsstelle (Property Transaction Office). Arnold Schalita and his wife Frieda fled to Italy and then to the USA, where they lived from 1939, moving to Cincinnati in 1944. In 1962, Frieda Schalita claimed for compensation for the compulsory Reichsfluchtsteuer (Reich Flight Tax) and "Judenvermögensabgabe" (Jewish Asset Levy) from the Fonds zur Abgeltung von Vermögensverlusten politisch Verfolgter (Fund for the Compensation of Losses of Assets of Political Persecutees). Arnold Schalita's studio had already been officially deregistered in 1949.