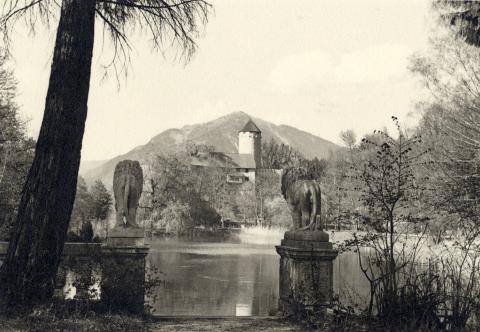 Schloss Matzen was mentioned for the first time in 1278 and is one of the oldest surviving castles in Tyrol. It was remodelled by the English-Austrian Baillie-Grohmann family in the nineteenth century, and today it is an elongated building flanked by two towers, the old rectangular tower in the west and the round keep in the east. During the Nazi era, the Innsbruck attorney Kurt Strele was appointed on 10 September 1941 as administrator of the Austrian assets of the Baillie-Grohmann family. Although some of the sculptures in the Art History Collections of the Tiroler Landesmuseum Ferdinandeum had been stored at Schloss Matzen from autumn 1943, the rent contract for the vaulted ground floor room, the kitchen and the vaulted arcade between them for storing the cultural objects under Strele's supervision was not signed until June 1944. The contract was agreed for the duration of the war, backdated to September 1943. The castle was owned until 1957 by the Baillie-Grohmann family, which then sold it to the US architect Ernest Kump. Today it functions as a hotel.