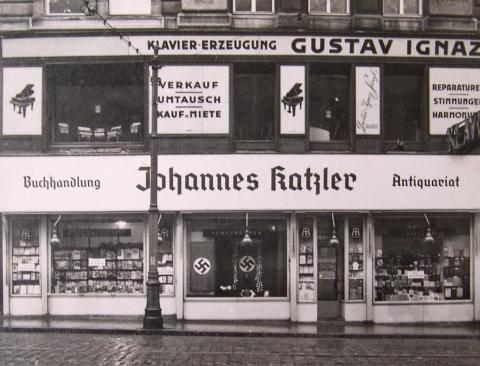 On completion of his education at commercial college, Johannes Katzler worked until 1924 in his parent's company in Vienna. After the company went bankrupt, he began training the same year as a bookseller at Hanseatische Verlagsanstalt AG in Hamburg, owned by the nationalist and antisemitic Deutschnationaler Handlungsgehilfen-Verband and integrated after the Nazis came to power in 1933 into the Deutsche Arbeitsfront (German Labour Front – DAF). After being transferred to Munich in 1929, Katzler worked for Albert Lange-Georg Müller-Verlag, which had been purchased by the Hanseatische Verlagsanstalt and from 1934 to 1938 had a 50 per cent holding in the nationalist Lhotzky-Verlag. In 1934, he joined the NSDAP publishers Franz Eher-Verlag, where he worked as a representative and advertising manager in Munich and Berlin. That same year he worked for department 2 of the Reichsministerium für Volksaufklärung (Reich Ministry of Popular Enlightenment) as head of the central publicity department for anti-Comintern publications at Nibelungen-Verlag. This was part of the Gesamtverband Deutscher antikommunistischer Vereinigungen (Anti-Komintern), which conducted a propaganda campaign against the Soviet Union. In this position, he was also involved in the National Socialist propaganda against the Dollfuß/Schuschnigg regime. In January 1933, he joined the Brigade Berlin-Ost of the SA as a Rottenführer and in July of that year the Leibstandarte der SA IV/11 and 29. After the annexation of Austria in March 1938, he was transferred by Eher-Verlag to represent the publishers in Austria and organize the export of anti-Comintern propaganda to the Balkan countries. He was also local leader of NSDAP district 3 in Vienna and was one of the greatest beneficiaries of the looting of the Vienna book and antiques business. Using his contacts with the NSDAP propaganda office in Vienna, and with Wilhelm Baur, political director of Eher-Verlag, and the Gestapo, and by threatening violence to booksellers, he acquired the inventories of seven book and antiques dealerships. He Aryanized the business of Alois Reichmann at Wiedner Hauptstraße 18–20 in the 4th district and its warehouse on Karlsplatz. He also paid the Vermögensverkehrsstelle (Property Transaction Office) a token price to acquire the stocks of a further six liquidated businesses: Richard Lányi, Josef Kende, Moritz Perles, Max Breitenstein, Heinrich Saar and Carl Wilhelm Stern. He also privately appropriated Lányi's painting and print collection. He combined the looted books at the Aryanized antiques business of Alois Reichmann, which he continued to operate under the name Johannes Katzler Verlag, Buchhandlung und Antiquariat. Katzler exported books to Hungary, Yugoslavia, Italy, the Netherlands, Belgium and Switzerland. He is thought to have sold a large part of his inventory to Baldur von Schirach. During the war, books were transferred from Katzler's inventory to depots in the vicinity of Vienna to protect them from air raids. He was conscripted to the Wehrmacht in 1941, served in the Balkans and was captured by the British.

In summer 1945 the Vienna police shut down Katzler's business and the Staatsamt für Industrie, Gewerbe, Handel und Verkehr (State Office for Industry, Commerce, Trade and Transport) put it under public administration. Katzler, who was released from British captivity in November 1945, was arrested in June 1946, charged in connection with Alois Reichmann and Richard Lányi and convicted in May 1947 and sentenced to eighteen months' imprisonment by the Vienna Volksgericht under §§ 4 and 6 of the War Criminals Act (violation of humanity and human dignity and illegal enrichment) and §§ 11 and 10/2 of the Prohibition Act (high treason and illegality). With allowance for the time spent in custody, Katzler was released after a few months. After the conviction had been partially quashed by the Supreme Court of Justice, Katzler was retried in 1949 and the 1947 conviction was confirmed. In 1951 the case was reopened but closed again in accordance with the 1957 Amnesty Act. After the Reichmann bookstore Aryanized by him was removed from public administration in April 1949 and was forfeited to the Republic of Austria, it was restituted in April 1951 by the Finanzlandesdirektion für Wien, Niederösterreich und Burgenland (Regional Tax Office for Vienna, Lower Austria and Burgenland) to the heirs and testamentary beneficiaries. The extensive stock of books that Katzler had appropriated after 1938 were not the object of the case heard before the Vienna Volkgericht and their whereabouts are unknown.