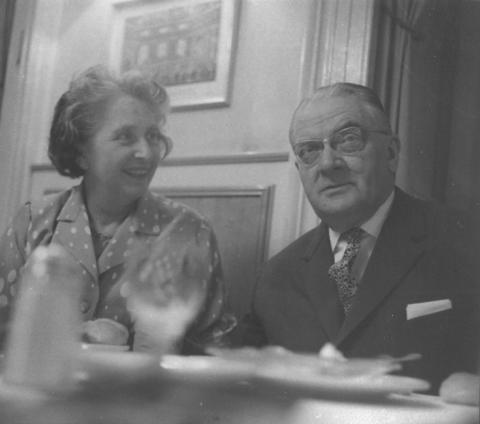 Mathilde Pfannl was employed from 1929 to 1939 by the Kleinkaufmannschaft Wien fund and from April 1939 in the commerce department of the Wirtschaftskammer Wien (Vienna Economic Chamber). In January 1940 she moved to the registry department of the Kunsthistorisches Museum in Vienna. After a few months in the administration, Fritz Dworschak, provisional director of the museum, hired her as management secretary, where she remained until the end of the war. Through her position, she had direct insight into Dworschak's wide-ranging agenda, which included not only heading the Kunsthistorisches Museum but also administration of the Zentraldepot für beschlagnahmte Sammlungen (Central Depot for Seized Collections) in the Neue Burg (until July 1940), organization of salvaging operations from Viennese art museums (until mid-1942) and (from August 1942) development of a coin collection for the planned Linz Kunstmuseum. She recorded her experience and other impressions of her work until 1945 in a manuscript in 1981 with photos, now in the archive of the Kunsthistorisches Museum. Although she describes the Nazi era and the first post-war phase, there is little biographical information.

In June 1945 she applied to the State Chancellery to have her name removed from the register of NSDAP members. After a short period of penal labour, she was able to return to the Kunsthistorisches Museum in August 1945. Senat 7 der Sonderkommission I. Instanz beim Staatsamt für Volksaufklärung, für Unterricht und Erziehung und für Kultusangelegenheiten (Senate 7 of the Special Commistion at the State Office for Popular Enlightenment, Schools and Education, and Cultural Affairs) responsible for implementing the Prohibition Act in the Kunsthistorisches Museum classed Pfannl in December 1945 as a minor offender because there was evidence only of an application to join the NSDAP but not of membership. Pfannl continued to work as a secretary for the First Director August Loehr and for the Picture Gallery, and from 1955 was also entrusted with inventory work. She retired in 1967 and in 1968, at the suggestion of Friderike Klauner, director of the Picture Gallery and Eduard Holzmair, First Director of the Kunsthistorisches Museum, received the Goldenes Verdienstzeichen der Republik Österreich (Gold Medal of Merit of the Republic of Austria) for her years of service.