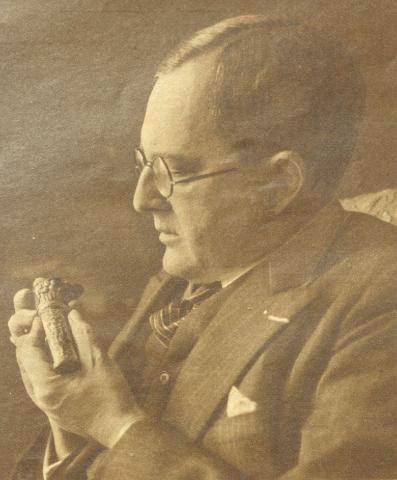 The son of the academic painter August Ignatz Grósz and Henriette, née Countess Attems, studied art history, history and classical archaeology at the University of Vienna. At the same time he attended the 29th course at the Institut für Österreichische Geschichtsforschung (Institute of Austrian Historical Research) from 1911 to 1913. He obtained his doctorate in July 1914 with a thesis on ceremonial armour. During the First World War he was classed as fit for limited duties and worked in the administration of the Heeresmuseum (Army Museum) in Vienna. In 1921 he was recruited as a curator in the Weapons Collection of the Kunsthistorisches Museum in Vienna. In subsequent years he compiled bibliographies on weaponry, wrote studies on the history of helmets and armaments, and conducted research on tournaments and hunting and on armouries in Austrian Bohemia. Many of his works remained only in manuscript form, however. From 1934 to 1936 he headed the restructured Weapons Collection in the bel étage of the Neue Burg. In early 1938 he became director of the Weapons Collection but had to leave the museum in the second half of March 1938 for political reasons, since his wife Elvira was deemed in Nazi terminology to be a "first-degree Mischling". His father-in-law, the antiques dealer and publishing bookseller Josef Kende was arrested immediately after the annexation and deported in April 1938 to Dachau and in September to Buchenwald, where he perished in October 1938. Grósz subsequently found work with the Hammerl company at Piaristengasse 7 in Vienna's 8th district. In order, presumably, to work again as an art historian, he applied in February 1943 for admission to the Reichskammer der bildenden Künste (Reich Chamber of Fine Arts). The application was turned down, the Gau headquarters in Vienna judging him to be "politically indifferent", "sympathetic to Jews" and "related to Jews". He died a few months later in Vienna.