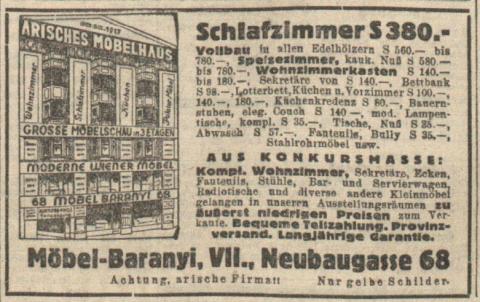 Karl Baranyi, who came from Bohemia, first registered his domicile in 1919 in Vienna, where he worked as an auctioneer at Neubaugasse 68 in the 7th district until he lost the concession in 1932 after being sentenced to imprisonment for misappropriation. The loss of his business prompted him to move to Berlin to work in his mother Hedwig's coffeehouse. In December 1938 he returned to Vienna to manage his brother Gustav Baranyi's furniture and antiques business, also at Neubaugasse 68. From 1935, Karl Baranyi was an associate member of the SS and from 1938 applicant to join the NSDAP. His application was rejected in 1941, however, because of his criminal record and on the grounds that he only sought membership for personal business reasons. In 1939, Baranyi, his brother and his mother acquired a property in Baden, Andreas-Hofer-Zeile 23, from Cäcilie Lilienthal, who owned an art collection and other properties in Vienna together with her husband and who was being persecuted on account of her Jewish origins. In an annex to the sales contract was a list of furniture that was not part of the sale. As the Baranyis delayed transferring these objects in spite of several requests to do so, Cäcilie Lilienthal ultimately made a claim in August 1941 at the Vienna Landesgericht (provincial court), which was settled out of court that same year. In July 1942, Cäcilie Lilienthal was deported, probably at first to Theresienstadt and from there to Auschwitz, where she perished.

In 1946, Karl Baranyi registered the acquisition of the property in accordance with the Vermögensentziehungs-Anmeldungsverordnung (Regulation on the Notification of Seized Property), while Cäcilie Lilienthal's son Karl René made an application to the Bundesministerium für Vermögenssicherung und Wirtschaftsplanung (Federal Ministry for Securing Property and Economic Planning) on the same subject. Baranyi was charged before the Volksgericht in Vienna on suspicion of illegal enrichment according to § 6 of the Kriegsverbrechergesetz (War Criminals Act), but the proceedings were dropped just a year later. According to five decisions by the Restitution Commission before the Landesgericht für Zivilrechtssachen (provincial court for civil law matters) between 1950 and 1955, Baranyi was ordered to return the property in Baden and the inventory, including furnishings and household items, as well as numerous prints and paintings, to the descendants of Josef and Cäcilie Lilienthal. In 1952, Karl Baranyi was deleted from the "special lists identifying National Socialists" because he had never been accepted as a member of the NSDAP and had not been required to register his status as an associate member of the SS. Available sources give no further indication of Baranyi's life.