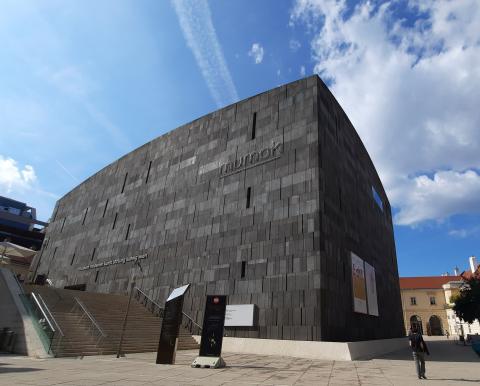 On 21 September 1962, the Minister of Education Heinrich Drimmel opened the Museum of the Twentieth Century in the adapted former Austrian pavilion for the 1958 Brussels Expo, now in the Schweizergarten in Vienna. The first director was the Austrian art historian Werner Hofmann, who headed the museum until 1969. Before the opening, he had acquired ninety works for the museum between 1959 and 1962. His aim was to show the main trends in twentieth-century art through significant paintings, sculptures and buildings, with particular focus on artists who came from or had received training in Austria. In the collection, which now contains around 10,000 works, are not only pictures, sculptures and prints but also architectural models, furniture, photos, videos and films. To accommodate the 128 works by the German art historians and industrialists Irene and Peter Ludwig, which the Austrian state, represented by Minister of Science Hertha Firnberg, had been promised on loan in 1978 following an exhibition of the Ludwig collection at the Künstlerhaus a year earlier, the Gartenpalais Liechtenstein in the 9th district of Vienna was rented in 1979 as an additional exhibition site. The museum changed its name at the same time to Museum moderner Kunst, also referred to as the 20er Haus. The Österreichische Ludwig-Stiftung für Kunst und Wissenschaft was founded in 1981, and ten years later the museum was again renamed as Museum moderner Kunst Stiftung Ludwig Wien. Both events had been preceded by major donations by the Ludwigs to the foundation, which were incorporated in the mumok. In 2001 the collections were moved to the new building designed by Ortner & Ortner in the MuseumsQuartier in Vienna.

With the entry into force of the Art Restitution Act in 1998, systematic provenance research was inaugurated at the mumok and is still going on – with interruptions – today. As the artworks from the Ludwig-Stiftung are permanent loans and thus not owned by the state, they are not the object of research by the Commission for Provenance Research. The picture The Alliance by George Grosz, which was purchased by the mumok in 1986 and was located in the early 1930s with the art dealer Alfred Flechtheim, was considered at two meetings of the Art Restitution Advisory Board, on 29 March 2006 and 8 March 2013. Restitution to the legal successors of Alfred Flechtheim or George Grosz was not recommended, because the sale in 1938 of the painting "from the estate of Alfred Flechtheim", who had died in 1937, had taken place in the Netherlands and hence outside the jurisdiction of the German Reich at the time. On 3 July 2015 the Board recommended the restitution to the legal successors of Alfred and Rosa Kraus of the painting by Max Oppenheimer given to the mumok in 1988, Portrait of Rosa Kraus, the sister-in-law of Karl Kraus, whose interior furnishings were lost in direct connection with her persecution and subsequent flight.